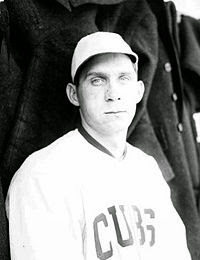 ~Ray Grimes 1893–1953 (Cubs 1922-1925)
Ray Grimes was an instant phenom for the Cubs when he joined them for his rookie season of 1922. He was an absolute RBI machine, one of the great clutch hitters of his era. During that season he set a record that still stands today when he got an RBI in seventeen consecutive games. During that streak he was so “in the zone” that he was unconscious. In 66 at-bats, he had 28 hits, including eight doubles, two triples, three homers, and 27 RBI. The Cubs thought they had a first baseman that would hold down the position for a decade. Unfortunately for Ray and the Cubs, his sophomore season was an entirely different experience. In May of 1923, he badly dislocated his back sliding into second base: a very serious injury. Instead of taking the time to recuperate, he rushed back onto the field a few weeks later and re-injured himself. That put him out for two months. It was an injury he couldn’t quite shake. The following season he started off well too, but was re-injured in June, and by July 8th of the following year, the Cubs decided they didn’t need him anymore. By then they had another first baseman (Harry Cotter). Ray Grimes — their great hope of only a few years earlier — was released. In his four seasons in Chicago he hit .321, .354, .329, and .299. He re-surfaced briefly in 1926 on the Phillies, and could still hit (.297), but his back simply wouldn’t allow him to play on a regular basis. Ray Grimes became another “what could have been” story in a long line of them for the Chicago Cubs.

~Larry Cox 1947–1990 (Cubs 1978)
One of the three catchers for the 1978 Cubs, Larry Cox hit .281 in just over a hundred at-bats. In a combined 450 at-bats, starter Dave Rader and his backups Larry Cox and Tim Blackwell managed to hit only five home runs. After his playing career ended, Cox coached for the Cubs. He was on the coaching staff of the division-winning 1989 Cubs. Unfortunately, he died of a heart attack after the season at the very young age of 42.

~Dave Roberts 1944–2009 (Cubs 1978)
Roberts got knocked around pretty good during his year with the Cubs (1978), but he also won a World Series championship the following year with the Pittsburgh Pirates. Roberts is in the top five of several career categories for Jewish pitchers, behind only the likes of Sandy Koufax, Ken Holtzman, and Steve Stone. His other claim to fame was giving up the very last hit and RBI of Hank Aaron’s career.

~Eddie Miksis 1926–2005 (Cubs 1951-1956)
Eddie was acquired from the Dodgers in the trade that sent Andy Pafko to Brooklyn. That was one of the most lopsided trades in Cubs history (and not in a good way). When the Cubs traded him to the Cardinals in 1956, that also was a lopsided trade (and not in a good way). During his Cubs years, the team broke the color barrier by bringing in Ernie Banks, Gene Baker, and Sam Jones. Eddie allegedly lent his glove to Ernie before Ernie’s first game.

~Andrew Cashner 1986– (Cubs 2010-2011)
Cashner was a Cubs first round pick in 2008, and came up to the big club just two years later. He appeared in 53 games as a reliever and showed flashes of brilliance, mixed with a few really bad appearances. There was little doubt, however, that he was a key piece of their pitching future. That is, until the new brain trust came aboard, led by Theo Epstein. They traded him to San Diego shortly after they took the reins, and that was a trade few Cubs fans will regret. In return for Cashner, the Cubs got Anthony Rizzo.

~Barney Olsen 1919–1977 (Cubs 1941)
Barney was a Cub for the last two months of the 1941 season. They actually gave him a decent shot at playing at the end of the year. The 22-year-old center fielder hit .288, and played well. But he spent the entire 1942 season in the minors and then was drafted into the military. Olsen played in the minors again after the war, but never made it back up to the show.

~Con Daily 1864–1928 (Colts 1896)
Daily was born before Abraham Lincoln was re-elected. Con (short for Cornelius) was a catcher, outfielder, and first baseman and had a good big league career before he came to Chicago as a 32-year-old. He hit .074 in nine games for the Cubs (then known as the Colts), and that was it for his days in the big leagues. His brother Ed played in the majors too.