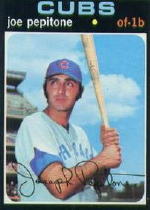 ~Joe Pepitone 1940– (Cubs 1970-1973)
On July 29, 1970, the Cubs traded their top prospect, shortstop Roger Metzger (who went on to play a decade in Houston) to the Astros for a player that had just walked out on his team because they tried to give him a roommate on the road — Joe Pepitone. Pepitone was a great glove man with power, but he also had one of the worst attitudes in Cubs history. The fans loved him though, because he was flamboyant and showy, and everything else the Cubs had always lacked. He wore his hair long (wigs), wore his shirt open to show his hairy chest and gold chains, and was the first player in baseball to bring a hair dryer into a clubhouse. On his first day as a Cub he arrived in a limo. He was so deep in debt he owed the team half his salary before the year began. Pepitone bought a club on Division Street and called it “Joe Pepitone’s Thing.” He opened a hair salon and started selling Joe Pepitone wigs. He parked his Harley inside Durocher’s office so that kids wouldn’t bother him after the game. One time, during pre-game warmups, he was thrown a foil packet full of joints by his fans in the bleachers. He hid them in the outfield ivy until after the game (according to an interview he gave to Rolling Stone magazine many years later). And while things were going well for the Cubs, Joe Pepitone was not a problem. On the other hand, manager Leo Durocher — who recognized a young version of himself in Pepitone — knew it was just a matter of time. In his autobiography Nice Guys Finish Last, this is how he referred to him. “If you’re thinking that Pepitone was sent to me in just retribution…I have to admit there were times that the thought crossed my mind.” When things starting going bad, Pepitone was always in the middle of it. He had a real problem with authority figures and he incited some of his teammates to feel likewise. The relationship with Durocher soured and became toxic. It all blew up in 1972. He walked out on the team on May 2, 1972 and asked to be put on the voluntary retirement list. He was sick of baseball and wanted to concentrate on his nightclub, but as usual, the money sent him crawling back. Unfortunately for Pepitone, being placed on the list made him ineligible for sixty days. He returned the very first day he legally could, but he was rusty and just couldn’t hit anymore. A year later the Cubs sent him packing, trading him to the Atlanta Braves. After his playing days Joe was busted on drug charges, and spent four months in prison at Rikers Island. (Photo: Topps 1971 Baseball Card)

~Jim Qualls 1946– (Cubs 1969)
Qualls was one of the many players that Leo Durocher trotted out to center field to solve their outfield problems in 1969 (with less than stellar results). Jim was a rookie, and he only hit .250, but he did have one magical moment that summer. On July 9th, he came up to bat with two outs in the 9th, and ruined Tom Seaver’s no-hitter. The Cubs traded him to the Expos the following year (for Garry Jestadt). Qualls only batted nine times in an Expos uniform before being shipped back down to the minors. He later had a cup of coffee with the White Sox in 1972.

~David Phelps 1986– (Cubs 2019)
The Golden Domer had already pitched for four big league clubs (Yankees, Marlins, Mariners, and Blue Jays) and recovered from Tommy John surgery before he joined the Cubs in July of 2019. They needed his veteran arm in the bullpen, and for the most part, he came through. In 24 appearances he posted a 3.18 ERA.

~Derek Holland 1986– (Cubs 2019)
Derek had a few very good seasons as a starting pitcher for the Texas Rangers and even appeared in two World Series for them, but by the time the Cubs acquired him at the trading deadline in 2019, he had become a lefty reliever who could only face lefties. White Sox fans called him the Dutch Oven because he was roasted so badly when he was with them in 2017, and Holland had a similar experience on the north side of Chicago. He walked eleven men in 15 innings, posted an ERA near 7, and served up a few dramatic late inning homers.

~Felix Fermin 1963– (Cubs 1996)
Felix played ten big league seasons, including several years with Cleveland when he was the team’s starting shortstop. By the time he arrived in Chicago, it was the tail end of his career. He had already been cut by the Yankees and the Mariners in 1996 when the Cubs took a flyer on him. Fermin was done. He batted only .125 in 11 games, and never appeared in the major leagues again. Although, to be fair, Felix was always more known for his fielding than his hitting. In over 3000 big league plate appearances, Fermin hit only 4 homers.

~Dave Rowe 1854–1930 (White Stockings 1877)
Rowe eventually played seven years of big league baseball, but it all began with his stint in Chicago. He played in exactly two games in the outfield for the Cubs (then known as the White Stockings), and batted seven times (two singles). He also pitched one inning of one of those games. The 5’9″ right-hander gave up two runs — for an ERA of 18. His brother Jack also played in the bigs, although never with Chicago. 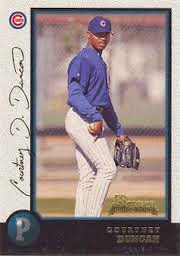 ~Courtney Duncan 1974– (Cubs 2001-2002)
Duncan was a right-handed reliever who initially experienced some success when he first came up to the big leagues with the Cubs. Unfortunately, the hitters in the National League eventually caught up with him. In his rookie season he appeared in 36 games and posted a 3-3 record, but by the end of the season his ERA had climbed over 5. He got another short taste the following season, but that was the extent of his big league career.