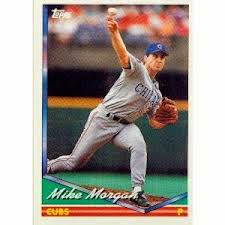 ~Mike Morgan 1959– (Cubs 1992-1995)
For a few years Mike Morgan shared the record for playing on the most big league teams (he pitched for 12 different teams) until it was broken by Octavio Dotel. He pitched 22 seasons in the majors, making his debut as an 18-year-old. Morgan was an All-Star with the Dodgers, but he probably had the best season of his career with the Cubs. He won 16 games in 1992 and posted a sterling 2.55 ERA. The following year he won another 10 games. In 1994, Morgan was minding his own business in his backyard, when he slipped on a boulder near his swimming pool and was hurt badly enough to miss the first month of the season. The Cubs got rid of him shortly after the strike ended in 1995. They had no way of knowing that he would pitch another seven seasons. In 2001, at the age of 41, he finally won the World Series as a member of the Arizona Diamondbacks.

~George Metkovich 1920–1995 (Cubs 1953)
His teammates called him Catfish. The clean-shaven outfielder/first baseman may be the only “catfish” who wasn’t nicknamed for his whiskers. He was given the nickname by Casey Stengel when he injured himself trying to pull a hook from a catfish. Catfish played ten years in the big leagues for the Red Sox, White Sox, Indians, Pirates, Braves, and of course the Cubs. In his career he never hit ten homers and never hit .300, but he did have a little speed and was known as a good glove man in center field. He hit .234 in his season with the Cubs, the second-to-last season of his career (’53).

~Sandy Martinez 1970– (Cubs 1998-1999)
Martinez was a backup catcher in the big leagues for eight seasons, but he will always be remembered for what he did on May 6, 1998, while wearing a Cubs uniform. Sandy was the catcher for Kerry Wood’s famous 20-strikeout game. He also played for Toronto, Florida, Montreal, Cleveland, and Boston.

~Rick Stelmaszek 1948–2017 (Cubs 1974)
The local Chicago boy (Mendel Catholic High) played his final season in the big leagues with the Cubs, serving as one of the team’s backup catchers. His claim to fame with the Cubs was allowing a third strike to drop, which enabled an Expos runner to reach base. Pitcher Bill Bonham struck out four batters that inning thanks to Rick’s error. After his playing career, he went into coaching for the Minnesota Twins, and was on the staff of two World Series winners.