~Fred McGriff 1963– (Cubs 2001-2002)
He was nicknamed the Crime Dog because of his last name’s similarity to the “actual” crime dog McGruff. Our crime dog, it’s safe to say, was at best a reluctant Cub. He refused to be traded to the Cubs at first, and then when he finally agreed to the trade, he seemed to be a bad luck charm as the surging Cubs faded out of contention shortly after he arrived in 2001. He had a great season in 2002 (30 HR, 103 RBI), but that team was headed nowhere. He played two more seasons after he left Chicago, and ended his career with 493 home runs. During his big league career he was one of the premier sluggers in the game.

~Tony Kemp 1991 (Cubs 2019)
Kemp was acquired at the trade deadline in 2019 in exchange for catcher Martin Maldanado. The spunky little infielder was a shot of energy to the team, and he connected with the crowds by doing a backflip on the field. Upon closer examination of his stats, however, he didn’t really perform that well. In nearly a hundred plate appearances he hit only .183. On the other hand, he did prove versatile. Kemp played 2B and all three outfield positions in a reserve role.

~Alex Hinshaw 1982– (Cubs 2012)
Hinshaw pitched in only two games for the Cubs, and the last one was bad enough to keep him out of the big leagues ever since. He faced five batters, and all five of them reached base. Actually, three of them only briefly did, as they touched every base on their home run trots. (Aramis Ramirez, Ryan Braun, and Corey Hart) 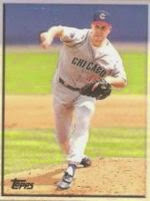 ~Steve Trachsel 1970– (Cubs 1993-1999,2007)
Trachsel had a couple of very good seasons for the Cubs. He was an All-Star in 1996, and won 16 games for them in 1998. He also pitched in a very historic game in a Cubs uniform. On July 13th, 1995, the Cubs hosted the Cincinnati Reds at Wrigley Field. Although the game didn’t start until 7:05 that night, the game-time temperature was still 103 degrees. It was the hottest night in Chicago history. Trachsel didn’t make it out of the second inning. Barry Larkin torched the Cubs for three hits (including a triple and a homer), and three RBI, and former Cub Jerome Walton knocked in two more as the eventual Division-champion Reds won the game 11-5. In 1998, there were two more historic games. The one moment he will probably be most remembered for is the home run he gave up to Mark McGwire. It was McGwire’s 62nd homer of the year, surpassing the record held by Roger Maris. Trachsel appeared to be the only person in the stadium who was upset. Cubs first baseman Mark Grace patted McGwire on the bottom as he ran by, and Sammy Sosa charged in from right field to give him a hug. Later that same season, Trachsel pitched the 163rd game of the year…the one-game playoff versus the San Francisco Giants to determine that year’s Wild Card team. Trachsel and the Cubs won the game.