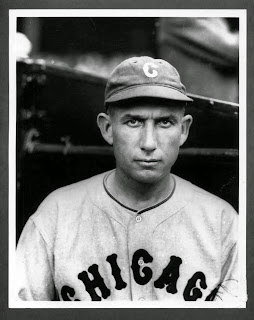 ~Percy Jones 1899–1979 (Cubs 1920-1922, 1925-1928)
Percy was a fifth starter/spot starter for the Cubs during his time in Chicago. He had two double-digit win seasons (1926, 1928), but was included in the trade that brought Rogers Hornsby to the Cubs just before the Cubs made it to the World Series in 1929. One of Percy’s roommates with the Cubs was the hard-drinking Pat Malone. They didn’t get along. Jones insisted on getting a new roommate after Malone trapped some pigeons on a hotel ledge and put them in Jones’ bed as he slept.

~Esmailin Caridad 1983– (Cubs 2009-2010)
The Dominican pitched out of the Cubs bullpen during parts of two seasons with mixed results. He pitched pretty well in 2009, but was lit up in 2010. He remains, however, the greatest Esmailin in Cubs history. He pitched in the minors and the Mexican League until 2017.

~Larry Casian 1965– (Cubs 1995-1997)
The reliever had two pretty good seasons as a situational lefty for the Cubs in the mid-90s, posting ERAs under two in both of those seasons. After he got off to a rough start in 1997, he was released and finished his career with the White Sox.

~Lenny Harris 1964– (Cubs 2003)
Lenny holds the all-time record for most pinch hits in a career (with 212). He was part of the Cubs team that won the division in 2003, although he had been let go by the time the playoffs began. Lennie also played for the Reds, Dodgers, Mets, Rockies, Diamondbacks, Brewers, and Marlins. After his playing days he became a hitting coach.

~Luis Marquez 1925–1988 (Cubs 1954)
Luis got his start in baseball in the Negro Leagues, and played several seasons for New York, Baltimore, and Homestead before breaking into the big leagues. The Puerto Rican outfielder began the season with the Cubs in 1954. He didn’t finish the year. He was traded in June to the Pirates for Hal Rice. During his time with the Cubs, Luis stole three bases and batted .083. He is still revered in his native Puerto Rico, where a stadium is named after him in Aguadilla. Unfortunately, his story doesn’t have a happy ending. Marquez was killed in a domestic dispute in 1988.

~George Hennessey 1907–1988 (Cubs 1945)
Because of the travel restrictions placed on baseball during World War II, the Cubs played their spring training in French Lick, Indiana. On March 3rd, 1945, when they gathered at Chicago’s Dearborn train station to board the train to camp, Hennessy was one of only six players on that train. He was a 37-year-old minor leaguer at the time. That perseverance eventually paid off, because George did get into two games for the Cubs during that pennant-winning season. His nickname was “Three Star” after the famous brandy (at the time) Hennessey’s 3 Star.

~Ed McDonald 1886–1946 (Cubs 1913)
Ed played in exactly one game for the Cubs on April 13, 1913 against the Pirates at West Side Grounds. He came in as a pinch runner, and didn’t score. He never batted, and never fielded a ball. He did, however, previously play for the Boston Braves for two seasons as a third baseman. After leaving the Cubs he played another nine seasons in the minors. There’s no record whether or not Ed McDonald had a farm. (E-I-E-I-O)