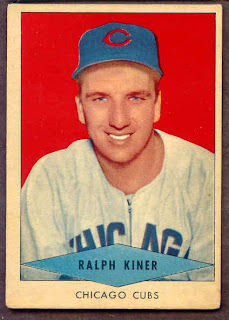 ~Ralph Kiner 1922–2014 (Cubs 1953-1954)
He was one of the most feared sluggers in the league when he played for the Pirates, but by the time the Cubs got him (1953), he was not the same player. He led the league in home runs all seven seasons with the Pirates, and though he did have a decent power season with the Cubs in 1953 (making the All-Star team), he was so slow by then, he could barely field his position. Combined with the equally slow Hank Sauer in the other corner, the Cubs outfield during those two seasons might have been the worst fielding outfield the Cubs ever had. Kiner joked that both he and Sauer used to scream “You got it, Frankie” every time the ball was hit in the air. Frankie Baumholtz was the center fielder on that team. After the 1954 season Kiner was traded to the Indians for Sam Jones, who went on to pitch a no-hitter for the Cubs in 1955. Ralph Kiner is a proud member of baseball’s Hall of Fame, but when you look at his plaque, don’t expect to see him wearing a Cubs hat.

~Mike Lum 1945– (Cubs 1981)
Lum had a very solid 15-year big league career, played mostly with the Braves (11 years) and the Reds (3 years). One of his most memorable days actually happened at Wrigley Field on July 28, 1977. He was one of the nine players to hit homers that day in a 16-15 Cubs win over the Reds. His last season in the big leagues was spent with the Cubs. He hit two homers and knocked in seven runs in limited action during the strike year of 1981. After his playing career ended, Lum became a well-respected hitting coach.

~Del Rice 1922–1983 (Cubs 1960)
Rice was a big league catcher for 17 seasons, including an All-Star season with the Cardinals in 1953, and two championship seasons (Cardinals 1946, Braves 1957). By the time he came to the Cubs he was strictly a backup. He hit .231 in limited opportunities. Rice went into coaching after his playing days were over, culminating in one season at the helm of the Angels in 1977.

~Shad Barry 1878–1936 (Cubs 1904-1905)
Barry was a super-utility man for the Cubs, playing every position except pitcher and catcher. He stole 17 bases over two seasons. He also played for Philadelphia, Cincinnati, Boston, St. Louis, and the Giants over a ten-year big league career.

~Chick Pedroes 1869–1927 (Orphans 1902)
His real name was Pedro, but the Americanized “Chick” was 32 years old when he played for Chicago for two games in 1902. He was born in Cuba, which would make him the first Latin-American player who ever played for the Cubs, and the first Cuban-born player to ever play in the big leagues. For some reason, he is not often acknowledged. Probably because he had exactly zero hits in six big league plate appearances.

~Egyptian Healy 1866–1899 (1889 White Stockings)
They called him Egyptian because he hailed from Cairo…Illinois. His real first name was John. Healy was a pitcher in the 1880s and early 1890s, and not a very good one at that. Although he lasted eight big league seasons, he once lost an amazing 29 games in a single season. For his career he was 58 games under .500. In his one season in Chicago, Egyptian was 1-4 in five starts for a third place club. Healy was only 32 years old when he died of consumption in St. Louis.