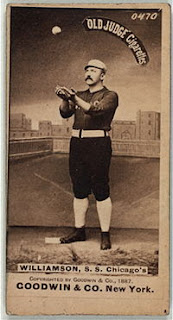 ~Ned Williamson 1857–1894 (White Stockings 1879-1889)
Williamson was Chicago’s star shortstop/third baseman during the 1880s. He thrilled the fans with his home runs, and was arguably the game’s first home run hero. In 1884 he hit 27 in one 112-game season. That was the record for 35 years. It wasn’t broken until 1919 by a little known slugger/pitcher named Babe Ruth. Of course, Ned’s record came with an asterisk. During the 19th century the ground rules were made by each home team. Ned’s manager Cap Anson declared that balls hit over a certain part of his field were to be declared homers. That just happened to be where Ned hit 25 of his 27 homers that season. The next season the team moved to West Side Grounds and Ned’s power suddenly disappeared. On the other hand, Ned was no fluke. He also set the record for doubles with 49 in 1883, and was a key member of the Chicago team that won five championships that decade. His baseball career was still going strong until Albert Spalding organized a world tour to promote the game in 1889. While the team played in Paris, Ned injured his knee. He was never the same after that. Just four years after his playing career ended, Williamson contracted tuberculosis and died at age 36. He is buried in an unmarked grave in Rosehill Cemetery in Chicago.

~Bill Hayes 1957– (Cubs 1980-1981)
In 1978 Tom Brunansky was taken right after the Cubs picked Bill Hayes. Brunansky led his team to the World Series. Hayes got nine big league at-bats. The catcher got two hits and struck out three times. Like many other Cubs named Bill, his nickname was Wild Bill. Hayes went into coaching after his playing career ended, and served on the big league staffs of the Rockies and Giants. With the Giants he won three World Series titles as their bullpen coach. He also managed in the minors for the Cubs for six years.

~Rawly Eastwick 1950– (Cubs 1981)
Rawly was the shutdown closer for the Big Red Machine team that won two World Series for Cincinnati (1975-1976). By the time he came to Chicago five years later, he was a shell of his former self. He actually pitched fairly well (2.28 ERA in 43 innings), but the Cubs released him just before the 1982 season and nobody gave Eastwick another chance.

~Jack Russell 1905–1990 (Cubs 1938-1939)
Russell was a two-time saves leader and an All-Star with the Senators before coming to the Cubs. The reliever pitched pretty well for the Cubs during their 1938 World Series year. He even got into two games of the series and was one of the rare Cubs pitchers who performed well. In all he pitched 15 years in the big leagues, and was an incredible 56 games under .500 (85-141). Not sure if he was a terrier or not.

~Eddie Stack 1887–1958 (Cubs 1913-1914)
Eddie pitched for Chicago two seasons while they were still at the old West Side Grounds ballpark. The right-hander appeared in eighteen games over those two seasons, and won 4. After he retired from baseball, Eddie settled in the Chicago area, and is buried at Mount Carmel Cemetery in Hillside. 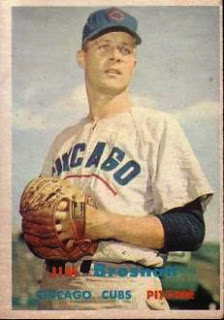 ~Jim Brosnan 1929–2014 (Cubs 1954-1958)
Brosnan helped set a record on April 24, 1957. The Cubs were playing the Reds in Cincinnati on a cold day in front of only 7212 fans at Crosley Field. Moe Drabowsky, Jackie Collum, and Jim combined to walk nine batters in one inning. By the time the inning was over, a one-run lead had turned into a six-run deficit. In one inning the Reds managed to score seven runs on one hit, thanks to a still-record nine walks in one inning. Ironically, Brosnan later became the closer for the Cincinnati Reds and led to them to the 1961 World Series. (Photo: Topps 1957 Baseball Card)