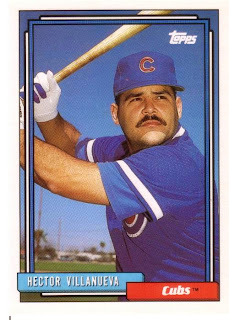 ~Hector Villanueva 1964 (Cubs 1990-1992)
Unlike most .230-hitting bad-fielding catchers, Hector managed to become a crowd favorite at Wrigley Field. Many fans saw themselves in Hector’s Ruthian physique. Others appreciated his “swing for the fences on every swing” approach to hitting. Others liked the way he flopped after wild pitches, his mammoth body sending plumes of dust into the air every time he made contact with the ground. The big Puerto Rican clubbed 22 homers in his three seasons with the Cubs. (Photo: Topps 1991 Baseball Card)

~Matt Walbeck 1969 (Cubs 1993)
The catcher was an eighth round draft pick by the Cubs. He eventually made it up to the big leagues in Chicago, although he didn’t get a lot of playing time. He started the 1993 season with the Cubs as the their backup catcher, but was sent down to the minors after only appearing in 11 games. After the season the Cubs traded Walbeck to Minnesota for Willie Banks. Matt caught for six big league teams in eleven seasons. He became a minor league manager after his playing days were over.

~Bill Serena 1924 (Cubs 1949-1954)
Serena played his entire major league career with the Cubs. In 1950 he finished fifth in the Rookie of the Year voting after starting all season at third base and hitting 17 homers. Unfortunately, Serena missed most of the 1951 season, and was moved to second base the next two seasons. He always had good pop for an infielder (48 homers in six big league seasons), but was eventually replaced by more talented players (Gene Baker and Randy Jackson).

~Tom Angley 1904 (Cubs 1929)
The career minor leaguer got one taste of the big time with the Cubs for one week in 1929. He filled in for catcher Gabby Hartnett after he went down with an injury, and managed to knock in six runs in his 16 at bats, but was later replaced by a host of other replacement catchers. Veteran Zach Taylor eventually got the bulk of the playing time, while Angley went back to the minor leagues. The short and squat catcher (5’8, 190 lbs) resembled Hack Wilson in his physique, but not in his results.

~Scott Stratton 1869 (Colts 1894-1895)
Stratton was a two-way player. He was mainly a pitcher, but his hitting was so good, he often played in the outfield on days he didn’t pitch. By the time he came to the Cubs (then known as the Colts) he was getting hit pretty hard. He won 10 games in two seasons, but he also posted ERAs of 5.89 and 9.60. That was the last hurrah of his big league career.

~Groucho Marx 1890 (Cubs fan 1909-1920)
The Marx family had moved from New York to Chicago in 1909. For much of that time they lived in a large house at 4512 South Grand Boulevard (now called Martin Luther King Boulevard). The house is still there. The Marx Brothers (Gummo, Groucho, Harpo, Chico, and Zeppo) were already a traveling Vaudeville Act in April of 1917 when America entered World War I. They had been touring in the south when War was declared. But the war forced them to take drastic measures: they purchased a farm in LaGrange, Illinois. Their mother had heard that farmers were going to be exempt from military service, and she wanted to do whatever was necessary to keep her boys out the fight…even if it meant becoming farmers. This is the way Groucho Marx described his days on the LaGrange farm…”The first day we got up at 5 in the morning. The second morning we dawdled until 6. By the end of the first week we slept until noon, which gave us just enough time to catch the 1:07 train to Chicago to see the Chicago Cubs play.” They became regulars at Wrigley Field (then known as Cubs park) during the World Series year of 1918.The Marx family moved back to New York in the fall of 1920 and a decade later they moved west to Hollywood. But the boys came back to Chicago often to perform. In 1930, the same year they filmed “Animal Crackers,” they also performed the stage version of the play with the same cast at Chicago’s new Civic Opera House. Each time they returned to Chicago, they made a pilgrimage to their old stomping grounds at Wrigley Field. They may have been the worst farmers in American history, but farming’s loss was the Chicago Cubs’ gain.