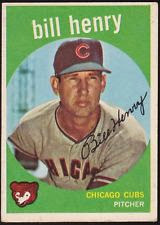 ~Bill Henry 1927–2014 (Cubs 1958-1959)
Bill led the league in appearances in his second and final season with the Cubs. He served as their closer in 1959, winning 9 games, and saving 12. After the season ended, Henry was traded (along with Lou Jackson and Lee Walls) to the Reds for slugging third baseman/first baseman Frank Thomas. Henry became an All-Star with the Reds, and saved more than 60 games over the next few seasons. He pitched in the big leagues until 1969 (at the age of 42). (Photo: Topps 1959 Baseball Card)

~Juan Cruz 1978– (Cubs 2001-2003)
Cruz came up in the wave of good young arms in the first few years of the century, along with Carlos Zambrano and Mark Prior. Many scouts thought Cruz might be the best of all of them. He wasn’t very good for the Cubs, but he did have a very solid 12-year big league career. Cruz pitched for the Braves, A’s, Diamondbacks, Royals, Rays, and Pirates (mostly out of the bullpen), and posted a 4.05 career ERA. He pitched for the Cubs in the 2003 playoffs and against the Cubs in the 2007 playoffs (as a member of the Diamondbacks). He still shares the Cubs record for most consecutive strikeouts. In 2003 he struck out eight men in a row.

~Don Robertson 1930– (Cubs 1954)
The local boy (Thornton High School in Harvey) played with the Cubs the first month of the 1954 season, along with fellow rookies Ernie Banks and Gene Baker. Unlike his two teammates, Don didn’t last. He was used mainly as a pinch runner, appearing in 14 games. He played a grand total of nine innings in right field, and made one putout. He batted six times, and didn’t get a hit. It was his only taste of the big leagues.

~Don Carlsen 1926–2002 (Cubs 1948)
He was just a 21-year-old rookie when he got his shot with the Cubs in 1948. He didn’t exactly seize the opportunity. Carlsen pitched one inning, gave up five earned runs, and was sent back down to the minors. He later re-emerged in the big leagues with the Pirates.