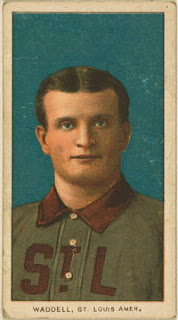 ~Rube Waddell 1876–1914 (Orphans 1901)
Rube was a common nickname for hayseeds and farm boys, and Rube Waddell was definitely that. He only pitched one season for the Cubs (before they were even called that) in 1901, and was only a .500 pitcher that season, but he blossomed as a pitcher the next season when he moved over to the upstart American League. He won 20 games or more four years in a row and was the most dominating strikeout pitcher of his era. He led the league in strikeouts for six years in a row. His best season was probably 1904. While pitching for the Philadelphia A’s, he struck out 349 batters in 383 innings pitched. Despite his Hall of Fame career (he was inducted to the hall in 1946), Rube was known even more for his off-the-field antics, which were considered completely bizarre. For instance, he had a bad habit of leaving the dugout in the middle of games to follow passing fire trucks to fires. He also performed as an alligator wrestler in the off-season. And sadly, he had a horrible alcohol problem. Waddell reportedly spent his entire first signing bonus on a drinking binge. As you might expect, his odd behavior and excessive drinking led to constant battles with his managers and teammates. His A’s teammates hated him so much, they forced management to trade him to St. Louis in early 1908, even though he was the by far the best pitcher on the staff. Modern day historians believe Waddell was on the autism spectrum. Rube was only 37 years old when he passed away in 1914.

~Kennie Steenstra 1970– (Cubs 1998)
Kennie pitched for the Cubs for two weeks at the end of May/beginning of June in 1998. It didn’t go too well for him. In four appearances covering 3.1 innings, he gave up two homers and posted an ERA north of 10. He pitched eleven seasons in the minor leagues, but this was his only taste of the big-time.

~Damian Miller 1969– (Cubs 2003)
Miller was coming off an All-Star season in Arizona when the Cubs signed him to be their starting catcher in 2003. He handled the pitching rotation of Wood, Prior, Zambrano, and Clement quite well, but his lack of hitting (.233 average) left the Cubs searching for a replacement. In the 2003 postseason Miller was only 3 for 22. After the season ended he was traded for catcher Michael Barrett.

~Bryan Hickerson 1963– (Cubs 1995)
The Cubs used Hickerson quite a bit during the first half of the 1995 season (38 appearances), but he was rocked hard. By the time they dumped him off to the Rockies in July, Hickerson’s ERA was 6.82. After his career, he worked for a baseball ministry, which spread the love of Jesus and baseball at the same time. He has also traveled to several war zones to preach and to feed our soldiers.

~George Frazier 1954– (Cubs 1984-1985)
Not to be confused with the former Heavyweight Champion of the world, this George Frazier was a pretty good reliever in the big leagues who came to the Cubs as part of the Rick Sutcliffe trade. He made over 400 appearances in his 10-year career, with stops in St. Louis, New York, Cleveland, Minnesota and, of course, Chicago. George was an important part of the Cubs bullpen during their division-winning 1984 season, and even appeared in the NLCS that year. After a much rougher 1985, the Cubs traded him to the Twins, where he finished his career.

~Charlie Silvera 1924–2019 (Cubs 1957)
Charlie (known as Swede) was a backup catcher in the big leagues for ten years, mostly with the Yankees. As the understudy to Yogi Berra, Swede didn’t get a lot of playing time. He was in his 30s when he was traded to the Cubs. In his last season in the bigs, he played in only 26 games and hit .208.

~Pickles Dillhoefer 1894–1923 (Cubs 1917)
His name was William Martin Dillhoefer, but everyone called him Pickles. During his rookie season in 1917 (his only season with the Cubs), he was the third-string catcher behind Art Wilson and Rowdy Elliot. It’s safe to say that he wasn’t going to challenge Ty Cobb in the batter’s box. Pickles only batted .126 that year, and the Cubs finished 5th out of eight teams. Pickles was a throw-in to the trade that brought Grover Cleveland Alexander to the Cubs in 1918, and he played for the Phillies and Cardinals the next four seasons. His best year was probably 1920, when he batted a whopping .263 in 200+ at-bats. Unfortunately, tragedy struck just as he was experiencing his greatest happiness. Pickles died at the young age of 27 from typhoid fever on February 23, 1922, just a few weeks after his wedding. He left behind a young bride, a colorful personality, and one of the best nicknames in baseball history. When the Sporting News did an article in 2001 about the best nicknames of all time, Pickles was named #1.