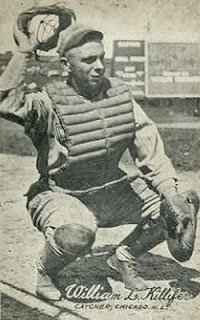 ~Bill Killefer 1887–1960 (Cubs 1918-1921, Cubs manager 1921-1925)
Bill Killefer was nicknamed Reindeer for his lumbering running style. Reindeer was a catcher and he ran like one. But he wasn’t just any catcher. Killefer was the personal catcher for Grover Cleveland Alexander, and he was the only one who could handle him on and off the field. Bill caught him with the Phillies, and for the first four years Alexander was with the Cubs, and managed him after that (with the Cubs), but when he was fired by the Cubs, Alexander fell apart. Some of the most legendary stories of Alexander’s drinking occurred during the days that Reindeer wasn’t around. When Alexander was reunited with Killefer in St. Louis (where Reindeer Bill was a coach), he immediately regained his touch, and added a few more great seasons to one of the greatest pitching careers of all-time.

~Adrian Cardenas 1987– (Cubs 2012)
The Cubs acquired Cardenas from the Oakland organization, and he served as a pinch hitter and occasional spot starter in the infield during his one season in the big leagues. The highlight of that year was probably the hit he got to break up A.J. Burnett’s no-hitter in the 8th inning. Before the 2013 season, Cardenas abruptly retired at the age of 24. He is now pursuing a career as a writer.

~Ramon Martinez 1972– (Cubs 2003-2004)
Not to be confused with All-Star pitcher Ramon Martinez (Dodgers), this Ramon was a backup infielder for the Cubs during two pretty successful years. He backed up Grudzielanek at second base, Alex Gonzalez (and later Nomar) at shortstop, and Aramis Ramirez at third base. During his two years in Chicago he got a lot of playing time because of his reliable glove. That glove kept him in the big leagues for 12 years. Ramon’s cousin later played for the Cubs too — Geovany Soto.

~Rob Sperring 1949– (Cubs 1974-1976)
The jack of all trades played every position with the Cubs except first base, catcher, and pitcher. He never hit much (career average of .211), but he was a valuable backup. Sperring was later included as a throw-in to the Bill Madlock for Bobby Murcer trade with the Giants.

~Roger Metzger 1947– (Cubs 1970)
Metzger only played in one game with the Cubs in June of 1970, and the former first rounder went 0 for 2 against Gaylord Perry in Candlestick Park in his big league debut. The following year the Cubs traded him to the Astros for Hector Torres in a straight shortstop for shortstop swap. Torres bombed out in Chicago. Metzger went on to become a Gold Glover and eight-year starter for the Astros. His career ended thanks to a freak accident. He accidentally sawed off the tips of four of his fingers with a table saw.

~Bobby Tiefenauer 1929–2000 (Cubs 1968)
Bobby pitched ten years in the big leagues despite never really having one outstanding breakthrough season. His lifetime record was 9-25. By the time he came to the Cubs in 1968, he was the fourth oldest player in the league. He posted a 6.08 ERA in the last nine appearances of his big league career. In 39 career at-bats, the pitcher got only one hit.

~Mickey Kreitner 1922–2003 (Cubs 1943-1944)
Mickey was just a 20-year-old kid when he came up the Cubs in the war year of 1943. The catcher didn’t get a lot of playing time with the Cubs that year, but did get into 39 games in 1944. Unfortunately for Mickey, he spent the entire pennant-winning 1945 season in the minors. He hung his up spikes when all the players who had been serving in the military returned from the war.

~Bill Moran 1869–1916 (Colts 1895)
Moran was the third catcher on the 1895 Cubs (then known as the Colts). The Joliet native caught 15 games that year, and managed to only hit .164. That undoubtedly contributed to the end of his time in Chicago. After playing a few more seasons in the minors, Moran retired to his home in Joliet, where he passed away in 1916 at the age of 46.

~Ad Gumbert 1868–1925 (White Stockings 1888-1889, 1991-1992)
Gumbert was a starting pitcher, and a fairly good one for his time. In his fourth and final season with the Cubs he won 22 games, but he also gave up a whopping 399 hits and walked over a hundred men in 382 innings. He later also pitched for Pittsburgh, Brooklyn, and Philadelphia. His brother and nephew both also played in the big leagues.

~Charlie Sprague 1864–1912 (White Stockings 1887)
Charlie was a left-handed starting pitcher who started three games for the Cubs (then known as the White Stockings) in the summer of 1887. He completed two of those games, and posted a 4.91 ERA. He later also pitched for Cleveland and Toledo.

~Mike Corcoran 1858–1927 (White Stockings 1884)
Mike was the older brother of fellow Cubs pitcher Larry Corcoran (a 30-game winner), and somehow found his way to the mound on July 15, 1884. He pitched exactly one big league game: a complete game 16-hitter, in which the opponents (Detroit) scored an astounding 10 unearned runs. The Cubs (then known as the White Stockings) lost the game 14-0. Larry pitched the day before and the day after with much better results. Mike never pitched again.