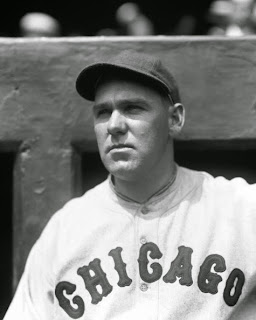 ~Chick Tolson 1898–1965 (1926-1930)
Chick was a backup first baseman and pinch hitter for the Cubs in the late 1920s. His teammates called him “Slug” for his less-than-speedy wheels. Slug played four seasons for the Cubs, and had his best season in 1929, when the Cubs won the pennant. He had a career high 109 at-bats that season, and even got one chance in the 1929 World Series. He struck out. In 1930, however, he did something that must have caused his teammates to hoot and howl. Slug stole the only base of his career. (Photo: Getty Images)

~Justin Speier 1973-– (Cubs 1998)
Chris Speier’s son was drafted by the Cubs and made his big league debut for them just a few years later. The right-handed reliever was included in the trade package that brought Felix Heredia to the Cubs in July of 1998. Heredia was a bust with the Cubs, but Speier went on to make 600 more big league relief appearances for the Marlins, Braves, Indians, Rockies, Blue Jays, and Angels over a stellar 12-year career.

~Don Wengert 1969– (Cubs 1998)
Wengert was acquired in May of 1998 from the Padres and was a spot starter and reliever for the Cubs the rest of that season. In 21 appearances he posted a 5.07 ERA. After the season he left the Cubs and signed with Kansas City. He also pitched for Atlanta, Pittsburgh, and Oakland.

~Bob Addis 1925–2016 (Cubs 1952-1953)
Bob got the most extensive playing time in his big league career with the 1952 Cubs. He was essentially a fourth outfielder filling in for Hank Sauer, Frank Baumholtz and Hal Jeffcoat. In June of 1953 he was included in the package of players sent to Pittsburgh to acquire Ralph Kiner. Pittsburgh didn’t have much use for him. It turned out to be the end of the line for Bob. He played another few seasons in the minors before hanging up his spikes after the 1956 season. He passed away just a few weeks after the Cubs won the World Series in 2016.

~Danny Green 1876–1914 (Orphans 1898-1902)
Green was a good hitting outfielder who always seemed to find a way to get on base. His lifetime on-base percentage was .359. After hitting .313 and stealing 31 bases for the 1902 Cubs (then known as the Orphans), he jumped to the upstart American League team across town — the White Sox. His last year in the big leagues was 1905 — the year before the Cubs-White Sox World Series.