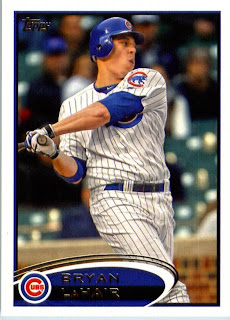 ~Bryan LaHair 1982– (Cubs 2011-2012)
LaHair was a slugger in the minor leagues, and then stormed out of the box in the beginning of the 2012 season for the Cubs. He was among the league leaders in homers for the first few months and made the All-Star team. Then…reality set in. At the end of the year he still had 16 homers. By the next season he was in Japan. (Photo: Topps 2012 Baseball Card)

~Charlie Newman 1868–1947 (Colts 1892)
The left fielder nicknamed “Decker” got a grand total of 62 plate appearances for the Cubs (then known as the Colts) in 1892, and never played in the big leagues again. Charlie played minor league ball in the Midwest for most of the 1890s. After that he became a police chief in Wisconsin, before settling out west in San Diego.