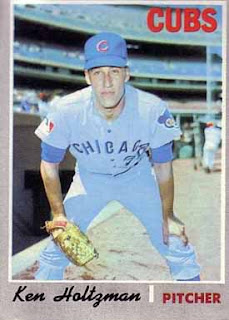 ~Ken Holtzman 1945– (Cubs 1966-1971)
He would become one of the rarest animals on the North American continent…a quality homegrown Chicago Cubs starting pitcher. But Holtzman was the real deal. He went 9-0 for the Cubs while serving in the National Guard in 1967, and when his military service was over, he followed that up with back-to-back 17-win seasons in 1969 and 1970. Holtzman also pitched two no-hitters. When he had an off-year in 1971, and started arguing with Leo Durocher (who allegedly was mad because Holtzman beat him at gin rummy), he was shipped off to Oakland in the trade that brought Rick Monday to the Cubs. In four seasons with Oakland he won an astounding 77 games, was named an All-Star twice, became a three-time World Series champ, won four games in those World Series, and even hit a home run. He returned to the Cubs in 1978 for the last two seasons of a very impressive career. (Photo: Topps 1970 Baseball Card)

~Danny Young 1971– (Cubs 2000)
The big left-hander broke camp with the Cubs in 2000, but had a very rough go of it. In only three innings pitched, he gave up six walks and five hits (including a grand slam homer). The Cubs sent him back down to the minors in early April and he never returned. The 83rd round draft pick is the lowest picked draft choice to ever make it to the big leagues.

~Fred Richards 1927–2016 (Cubs 1951)
His teammates called him Fuzzy. The 23-year-old first baseman played the last two weeks of the 1951 season and batted .296 with four RBI, but that was the extent of his big league career. He played in the minors for another eleven years. He died during spring training of the Cubs 2016 World Championship season.

~Bob Fisher 1886–1963 (Cubs 1914-1915)
After Joe Tinker jumped to the Federal League, Fisher became the everyday shortstop for the Cubs in their last season at West Side Grounds. He was known for his bat control. In 1915 he led the entire league in sacrifice hits with 42, and batted .285. As good as he was with the bat, however, he was a terrible baserunner. Fisher was thrown out trying to steal 20 times that season, and was successful only 9 times. When the Cubs and Feds merged in 1916, Fisher was not asked to come along. He finished his career with the Reds and Cardinals.

~Ed Lennox 1883–1939 (Cubs 1912)
Eggie, as he was known by his teammates, was a slick-fielding backup third baseman (to Heinie Zimmerman) on the Cubs for one season. That was a season in transition for the Cubs — the last season that saw Tinker, Evers, and Chance on the field at the same time. Eggie also played for Philadelphia, Brooklyn, and Pittsburgh of the Federal League. While he was with Pittsburgh, he hit for the cycle.

~Jim McCormick 1856–1918 (White Stockings 1885-1886)
In the early days of the National League, Jim McCormick was one of the first pitching stars. One season (1880), he won 45 games and pitched an astounding 657.2 innings (with 72 complete games). Obviously the rules were a little different in that era, but you can’t take away his 265 career wins. In his two seasons with the Cubs (then known as the White Stockings), McCormick won 20 and 31 games. Chicago won the National League both years. After the 1886 season, Cubs owner Al Spalding sold McCormick (and several of his teammates) because he didn’t approve of their hard-drinking lifestyle. Jim hailed from Scotland, and was the first MLB player born there.

~Jonathan Herrera 1984– (Cubs 2015)
With the youngest infield in the league in 2015, the Cubs needed a veteran backup, so they signed Herrera as a free agent. He had previously served as a backup infielder (2B, SS, 3B) for the Rockies and Red Sox. Herrera had several clutch hits during the season, and played an excellent 2B and 3B, but with the emergence of Javy Baez and Addison Russell, his playing time diminished significantly. He didn’t make the postseason roster.