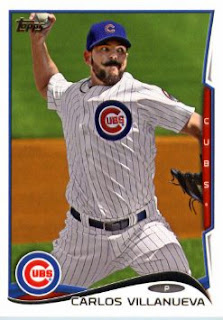 Carlos Villanueva 1983 (Cubs 2013-2014)
Carlos was signed as a free agent after pitching seven big league seasons in Milwaukee and Toronto. He was a very valuable pitcher for the Cubs for two seasons, filling every conceivable role. Carlos started 20 games, finished 20 games, won 12, and saved 2. He also sported the best mustache on the club. The Cubs allowed him to leave via free agency after the 2014 season. (Photo: Topps 2014 Baseball Card)

~Danny Hultzen 1989– (Cubs 2019)
If you tuned out during the last month of the 2019 season, you missed the Danny Hultzen era in Chicago. The former second overall pick in the draft (Mariners 2011) came up after rosters expanded and appeared in six games for the Cubs. He didn’t give up a single run.

~Taylor Davis 1989– (Cubs 2017-2019)
The Cubs rewarded their longtime farmhand with a call up to the big league club during September of the 2017 season. He got 13 at-bats in limited action and didn’t make the postseason roster. He spent 2018 at Triple A also, and got another six plate appearances with the big league club in September. During his brief cup of coffee in 2019, he managed to hit his first big league home run. It was a game tying grand slam against the Cardinals. He became only the seventh player in big league history to accomplish that feat with his first career homer.