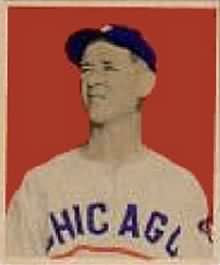 ~Johnny Schmitz 1920 (Cubs 1941-1951)
He was nicknamed Bear Tracks because of his lumbering shuffle to the mound. Schmitz was only twenty when he was called up to the majors, and pitched two seasons for the Cubs, but was drafted to serve in World War II in 1942. Bear Tracks was one of the rare players who returned from the war an even better player. He led the National League in strikeouts in 1946, and was named to the All-Star team. He had another great year two years later, finishing with a 2.64 ERA and an 18-13 record for a last place team. During his Cubs years he was known as a fierce competitor. How many pitchers have been ejected from a game for wearing illegal spikes? Only Bear Tracks Schmitz, who did it to further intimidate the batters. A noted Dodger-killer during his career (he beat them 18 times), he was later traded to the Dodgers in the deal that also put Andy Pafko in a Brooklyn uniform. By then he was no longer an all-star caliber pitcher. He pitched for the Dodgers, the Senators, the Red Sox and the Orioles before retiring after the 1956 season. Bear Tracks passed away in Wisconsin in October of 2011. (Photo: 1949 Baseball Card)

~Jason Berken 1983 (Cubs 2012)
The Cubs picked up the righthanded reliever from the Orioles at the end of the 2012 season and gave him a shot to make the club in spring training of 2013, but he was among the final cuts. He hasn’t pitched in the big leagues since.

~Ron Tompkins 1944 (Cubs 1971)
The 6’4″ reliever was naturally nicknamed “Stretch”. He appeared in 35 games exclusively out of the bullpen for a pretty good Cubs team in 1971. Among his teammates that year, Hall of Famers Ernie Banks (in his final season), Billy Williams, Ron Santo, and Cy Young Winner Fergie Jenkins. The Cubs finished in third place, behind the Cardinals and the World Series champion Pittsburgh Pirates. That was the last season of Tompkins’ big league career. He pitched two more seasons in the minors before hanging up his spikes.

~Dave Giusti 1939 (Cubs 1977)
Giusti won 100 games and saved 145 more in his outstanding career, including 30 in his all-star 1971 season, when he led the Pirates to the World Series. By the time he came to the Cubs, however, he was a whisper of what he once was. He did get one save in 20 appearances, but his ERA was 2 1/2 runs higher than his career average. It was the last gasp of his big league career.

~Cal Howe 1924 (Cubs 1952)
If you want to travel back in time to watch Cal pitch, set the wayback machine for September 26, 1952. It was his only appearance in the big leagues, and it happened in St. Louis’ Sportsman’s Park. Cal pitched the final two innings of a 10-3 Cubs loss. Even though he only pitched in that one game, he did face and retire two Hall of Famers (Red Schoendienst & Stan Musial) and the son of another (Dick Sisler, George Sisler’s son). Howe didn’t give up a hit, and finished his big league career with a perfect 0.00 ERA.

~Bob Schultz 1923 (Cubs 1951-1953)
Schultz was a spot starter and reliever for three seasons. He had a respectable 9-11 record, but he gave up a ton of baserunners. As a member of the Cubs, Schultz walked almost twice as many batters as he struck out (113 BB/61 Ks). He later pitched for the Pirates and the Tigers.

~Tony York 1912 (Cubs 1944)
Tony was a wartime player for the Cubs. At age 31 he made his big league debut and backed up shortstop Lenny Merullo and third baseman Stan Hack. Other than that one season, Tony was a career minor leaguer. He played 23 seasons in the minors, from 1933 to 1956.

~Hank Miklos 1910 (Cubs 1944)
Hank was a Chicago-born and bred lefthanded pitcher who had been out of baseball for five years when he tried out for the Cubs during the war. The Cubs gave the 33-year-old a shot, and he appeared in the only two games of his big league career. His ERA was 7.71.