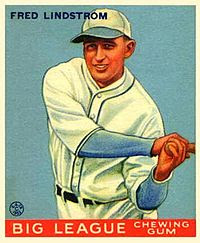 ~Freddie Lindstrom 1905 (Cubs 1935)
Lindstrom was a big star in New York for the Giants. In his rookie season of 1924, he came up late in the year and led the Giants to the World Series. He had many great seasons in New York, especially 1928, when he finished 2nd in the MVP voting, but the Chicago boy (Lane Tech grad) must have been thrilled when he became a Chicago Cub in 1935. Not only did the Cubs go to the World Series that year, they set a record that still stands today by winning 21 games in a row. That turned out to be Lindstrom’s only season in Chicago. He played one more season in the big leagues, but retired after the 1936 season at the age of 31. Fred settled back in his home town after his career was over, where he got to see his son make the big leagues with the White Sox in 1958. The senior Lindstrom was inducted into the Hall of Fame by the veterans committee in 1976. He passed away in 1981, and is buried in All Saints Cemetery in Des Plaines.

~Mike Mason 1958 (Cubs 1987)
Mason pitched most of his big league career with the Texas Rangers, but he did spend the bulk of the 1987 season with the Cubs. He won four games and posted an ERA of 5.68. The Cubs released him during spring training of 1988, and he finished his career with the Twins.

~Alan Hargesheimer 1954 (Cubs 1983)
Alan was a Chicago boy who bounced around the big leagues with stops at Kansas City and San Francisco, but he also got to pitch for his hometown Cubs in five games during the 1983 season. The righthanded reliever gave up four earned runs in his four innings pitched, to finish his Cubs career with an ERA of 9.

~Tony Balsamo 1937 (Cubs 1962)
Balsamo’s only big league season was with the woeful 1962 Cubs. That team was among the three or four worst teams in Cubs history, despite the presence of four Hall of Famers on the roster (Banks, Williams, Santo & Lou Brock). Tony was a righthanded reliever who pitched in 18 games the first few months of that season. He didn’t fare too well. His ERA was 6.44.

~Billy Clingman 1869 (Orphans 1900)
He was the backup shortstop during his one year with the Cubs (then known as the Orphans), but he also saw action with Cincinnati, Pittsburgh, Louisville, Washington and Cleveland in his ten year big league career.

~Dick Bertell 1935 (Cubs 1960-1964, 1967)
Bertell was a catcher for the Cubs during the College of Coaches era. He was in the starting lineup the day the Beatles played in Chicago for the very first time. Over his seven year big league career, Bertell hit ten homers, and batted .250.