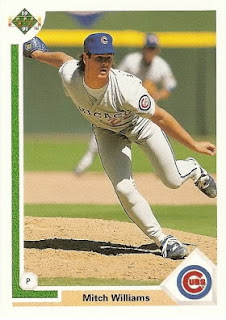 ~Mitch Williams 1964 (Cubs 1989-1990)
Cubs fans would sing the rock song “Wild Thing” when Mitch Williams emerged from the Chicago bullpen in 1989, in reference to his explosive but uncontrollable fastball (and yes, he got that nickname before the movie “Major Leagues” came out, with a reliever named “Wild Thing.”) The Cubs got him in a trade in exchange for Rafael Palmeiro and Jamie Moyer, which in retrospect is a really, really, geez, legendarily bad trade. (Although he did lead the Cubs to the playoffs in 1989, and pitched well in the playoffs, too. His ERA that series was 0.00 in 2 games.) Wild Thing saved 52 games in his two Cubs seasons, and eventually went to the World Series with the Phillies, losing the ’93 Series by giving up Joe Carter’s home run. In fairness to Mitch he did win two games and save the other two wins in the NLCS for Philly, but he’ll always be remembered for that home run…and his World Series ERA of 20.25.

~Scott Moore 1983 (Cubs 2006-2007)
Moore was a third baseman who played a bit for the Cubs at the end of the 2006 season, and was part of the trade package sent to the Orioles in 2007 for Steve Trachsel. Moore had a cup of coffee with the Orioles and Astros, and spent the 2014 season playing in the Cardinals minor league system.

~Darnell McDonald 1978 (Cubs 2013)
Darnell was a first round draft choice of the Orioles who played parts of seven big league seasons, including the last few weeks of the 2013 season with the Cubs. The Cubs thought highly enough of him to ask him to stay in the organization as a coach after the season. Darnell’s best season was with the 2010 Red Sox. He hit nine homers and batted .270 in over 300 at bats.