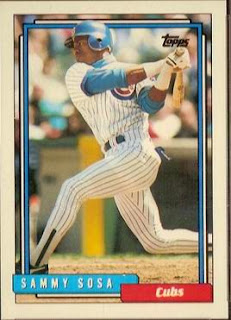 ~Sammy Sosa 1968– (Cubs 1992-2004)
Sammy was a phenomenon during his time with the Cubs. He holds the all-time record for homers hit in a Cubs uniform (545), and many of them were hit in dramatic fashion. His chase of the Roger Maris record (along with Mark McGwire) captivated the world in 1998. During that season, he may have been the most popular Cubs player of all time. Sammy was an MVP, a seven-time All-Star, won two home run titles, two RBI titles, led the league in runs three times, and hit more than 60 homers in a season a record-setting three times (although he didn’t win the HR title in any of the seasons he did so). The fans loved the way he ran to his right field spot, raising his hat in the air as a tribute to the bleacher fans each day. They loved his home run hop, his post-home run dugout routine done for the cameras, his ever-present smile, and they chanted his name when he came up to bat: SAMMY, SAMMY, SAMMY. He received a great reception around the rest of the league too; many of the NL fans saw Sammy as the entertainer he clearly felt he was. President Clinton even invited Sammy to attend the State of the Union message one year. The fans didn’t seem to notice or care that his teammates didn’t seem to feel the same way. They dismissed the anonymous grumbling and the accusations of “me first-ism” as jealousy. That all began to change in the summer of 2003. In an inter-league game against the Tampa Bay Devil Rays, Sammy’s bat exploded and Rays catcher Toby Hall picked up the portion of the bat that remained on the ground. He and the umpire immediately noticed the cork, and Sammy was tossed out of the game. In a post-game press conference he swore he accidentally grabbed the wrong bat. The league supposedly checked the other bats after the game (after Sammy and/or the Cubs had plenty of time to get rid of any suspicious bats) and found no evidence against him. That year he didn’t make the All-Star team for the first time since 1998. When Sammy hit .308 with two home runs in the 2003 NL Championship Series vs. the Marlins, Cubs fans seemed ready to forget all about that little corking incident. But it went downhill fast during the 2004 season. The league instituted new testing for steroids, and suddenly Sammy was doing his home run hops on balls barely hit to the warning track. During that summer, Sammy sneezed in the clubhouse and injured himself so badly he missed nearly a month of games. The Cubs fans didn’t officially desert him, however, until the team collapsed the last week of the 2004 season. In the final game of the year, Sammy left in a huff before the game was over. His teammates took that opportunity to bash his boom box into pieces with a baseball bat, an ignominious end to his Cubs career. The Cubs traded Sammy to Baltimore, and he got the last 35 home runs of his major league career with the Orioles and the Rangers. His 600th career home run came against the Cubs in an inter-league game, but the love affair with Chicago was long gone. (Photo: Topps 1992 Baseball Card)

~Aaron Heilman 1978– (Cubs 2009)
Heilman was a steady reliever who made nearly 500 career relief appearances, including 70 with the Cubs in 2009. Chicago acquired him for Ronnie Cedeno that year, and although Heilman gave up his fair share of long balls and walks, he was trotted out to the mound on a regular basis by manager Lou Piniella. Heilman also pitched for the Mets and Diamondbacks in his nine-year big league career.

~Dave Otto 1964– (Cubs 1994)
The local product (Elk Grove High School) is probably better known for his time as a fill-in announcer during Cubs broadcasts, but Dave Otto also got a cup of coffee with his hometown team. During the strike season of 1994, he appeared in 36 games and posted an ERA of 3.80. That was the last year of his nine-season big league career. Otto also pitched for the A’s, Indians, and Pirates.

~Jeff Reed 1962– (Cubs 1999-2000)
Reed was a (primarily backup) catcher in the big leagues for 17 seasons, the last two of which were with the Cubs. During those two seasons he backed up Benito Santiago and Joe Girardi. He also caught for the Twins, Expos, Reds, Giants, and Rockies.

~Gene Lillard 1913–1991 (Cubs 1936, 1939)
Gene was an infielder when he first came up to the Cubs in 1936 for limited duty. After the season he was converted into a pitcher, and made it back up to the big leagues a few years later on the defending NL Champs in 1939. Needless to say, they did not repeat. Gene pitched as a starter and a reliever, and appeared in twenty games. Lillard played in the minor leagues until 1954, shifting back and forth from pitcher to infielder to player/manager.

~Fred Raymer 1875–1957 (Orphans 1901)
Raymer was a utility man for the Cubs (then known as the Orphans), but his one season in Chicago didn’t yield such great results. Fred got lots of playing time, but didn’t get lots of hits. When the season was over, he was hitting only .233. He later got a cup of coffee with Boston. 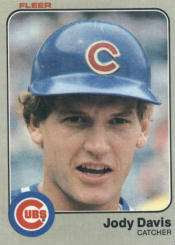 ~Jody Davis 1956– (Cubs 1981-1988)
Jody was an outstanding player for the Cubs during the 1980s: a two-time All-Star and Gold Glover. But even though he hit over 120 homers in his Cubs career (including six seasons in a row with double-digit homers), he was really made famous by Harry Caray, who used to sing the following to the tune of “Davy Crockett” every time Jody did something notable…”Jody. Jody Davis. Catcher without a fear.” Jody was also part of the singing Cubs that came out with a country song in 1984. That song was called “Men in Blue.” Jody still holds the Cubs record for most runs scored in a game with five.