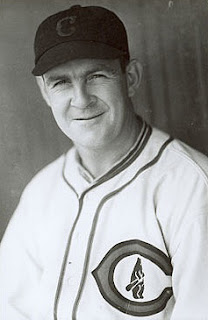 ~Larry French 1907–1987 (Cubs 1935-1941)
French was one of the most memorable characters to wear a Cubs uniform. He was a hero off the field (after leaving baseball, he participated in the invasion of Normandy as a landing craft material officer), but on the field it was a slightly different story. French started a World Series game for the Cubs in 1935 (losing it in the bottom of the ninth), and appeared in the 1938 World Series as a reliever, but that season he also made history. Larry became the only pitcher with a losing record in Major League history to lose as many as 19 games for a pennant winner. He went 10-19 on a team that was 89-63, personally accounting for nearly 1/3 of the team’s losses. That’s a pretty staggering total. Despite this “achievement,” French was very popular with the fans and his teammates. Again, it was the off-the-field stories that fueled his popularity. In 1938, he made news when he bought a live bear cub from a fan for $10. Larry learned a valuable lesson that summer…keeping a live bear cub isn’t as easy as it sounds. After the cub tore up his apartment, French somehow managed to convince his teammate Ripper Collins to take the bear off his hands. Collins learned the same valuable lesson. After a similar unpleasant experience, he donated the cub to a conservation camp in New York. Despite his record-setting season of 1938, Larry French was a pretty good starting pitcher during his Major League career. He won 18 games for the Pirates twice, and had two good years with the Cubs in 1935 and 1936, winning 17 and 18 games respectively. He finished his Major League career with 197 wins and a 3.44 ERA, and went to his grave (in 1987) without ever again owning a live bear cub.

~Miguel Dilone 1954– (Cubs 1979)
Dilone was a speedster. In the year before he joined the Cubs, Miguel stole 50 bases for Oakland despite getting less than 300 plate appearances. He stole 15 bases for the Cubs in only 38 plate appearances in 1979. The year after he left Chicago he stole 61 bases and hit .340 for Cleveland. Unfortunately for Dilone, that season was a complete fluke. His lifetime batting average was .265 thanks to that one year, but in ten of his twelve big league seasons he couldn’t crack .235.

~Clint Compton 1950– (Cubs 1972)
Clint was a left-handed reliever who pitched in exactly one game for the Cubs. It came on October 3, 1972. Clint relieved Larry Gura. In two innings he walked two, and gave up two hits and two earned runs. The Cubs lost 11-1 to the Phillies. It was his only appearance in the big leagues, but Clint can always say that he faced two Hall of Famers in that game: Steve Carlton and Mike Schmidt. Carlton grounded out to first and Schmidt singled to right.

~Earl Blackburn 1892–1966 (Cubs 1917)
Earl was a catcher who played in two games for the Cubs in July of 1917. They were the last two games of his five-year big league career. Before coming to the Cubs, Earl was a backup catcher for Boston, Cincinnati, and Pittsburgh.

~Snapper Kennedy 1878–1945 (Orphans 1902)
Kennedy had one of the all-time great names, but he only played in one big league baseball game. That came with the Cubs (then known as the Orphans) on May 1, 1902. He played center field and batted five times in a scoreless 12-inning game at West Side Grounds that was called because of darkness. Snapper didn’t reach base.

~Fred Demarais 1866–1919 (Colts 1890)
The French-Canadian pitched in one game at the big league level, and it happened on July 26, 1890. The Cubs (then known as the Colts) were playing at home against Brooklyn. Chicago lost the game 10-4, but Demarais pitched two scoreless innings.