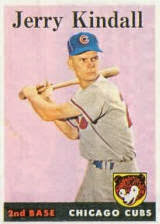 ~Jerry Kindall 1935–2017 (Cubs 1956-1961)
The Cubs signed Jerry (nicknamed Slim) as a Bonus Baby, but he never quite made the impact they anticipated. His best season with the Cubs was 1961. He hit .242 that year. Jerry played on the Cubs for parts of five seasons, and later played with the Indians and Twins, but the second baseman holds a career record that nobody wants. Of all the players since 1920 with more than 2000 career at-bats, Jerry has the lowest batting average (.213). On the other hand, after his big league career, he became a college coach at the University of Arizona and had a tremendous career. He won three College World Series titles and was inducted into the American Baseball Coaches Association Hall of Fame. (Photo: 1958 Topps Baseball Card)

~Todd Hundley 1969– (Cubs 2001-2002)
This seemed like a no-brainer free agent signing. The slugging son of Cubs icon Randy Hundley, returning to the ballpark of his youth to relive the glories of his father. Well, it didn’t quite turn out that way. His time with the Cubs was an unhappy one for both player and team. He was booed mercilessly by Cubs fans because he hit only .187 in his first year with the team, and .211 the following year. In 2001 he struck out 89 times in only 246 at-bats. Hundley was plagued with injuries too. But he did have one shining moment in a Cubs uniform when he homered to beat the hated crosstown White Sox.

~Jimmy Hallinan 1849–1879 (White Stockings 1877-1878)
The Irish-born Hallinan came to the Cubs (then known as the White Stockings) when his previous team the Reds ran into financial difficulty. Hallinan was a pretty good hitter, but Chicago had trouble finding places for him to play on the field because he was a terrible fielder. In his career he made 161 errors in only 111 games. In the middle of the 1878 season he had to quit because he became ill. The following year he died at the age of 30, from what was then described as “inflammation of the bowels” likely due to excessive drinking.

One Response to “Today’s Cubs Birthdays (May 27)”