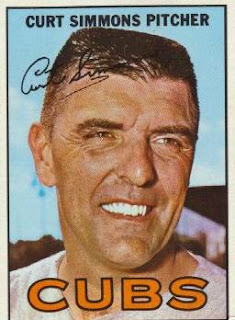 ~Curt Simmons 1929–(Cubs 1966-1967)
Simmons was a three-time All-Star that led his team to a World Series title, but of course, that team was not the Cubs. Curt Simmons was only two seasons removed from taking the Cardinals to the 1964 World Series when the Cubs acquired him in 1966. They hoped they were getting the pitcher that started two games in that memorable ’64 series against the Yankees, after winning 18 games in the regular season. They weren’t. They were getting a 37-year-old pitcher at the end of a very nice career. Simmons won 193 games during his 20-year baseball career, but only seven of those came with the Cubs. He started 24 games for the Cubs in 1966 and 1967, but the man who had a 3.54 career ERA, never sniffed an ERA south of four for the Cubs. He also allowed 17 home runs in those starts, prompting the team to sell him to the Angels. He retired shortly thereafter.

~Luis Salazar 1956– (Cubs 1989-1992)
He played against the Cubs in the 1984 playoff series vs. the Padres, but by the time the Cubs were back in the playoffs in 1989, he was a key member of the team. He hit .368 with a home run in the NLCS that year, and remained with the Cubs for three more seasons. He retired after the 1992 season. Luis is remembered for his versatility, his good attitude, a whisper campaign from Cubs locker room reporters that led to the ladies looking at him with a “large” amount of respect, and of course, his bold decision to keep his mustache well after the 1990s began.

~Turk Wendell 1967– (Cubs 1993-1997)
His real name was Steven John Wendell, but everyone called him Turk. His nickname came from his grandfather after he watched the three-year-old Steven repeatedly hurl himself into a snow mound out of the window of his western Massachusetts home. Turk was known for his eccentricities more than his pitching, which was really just so-so for the Cubs. Among his strange rituals…He wore a necklace made of claws and teeth of animals he killed. He chewed Brach’s black licorice on the mound. He brushed his teeth between innings. He talked to the baseball. He drew crosses in the dirt on the mound. He leaped over the foul lines coming in and out of the game. Before he threw his first pitch he waved to the center fielder and wouldn’t continue until the outfielder waved back. Oh, and of course, he wore #13. Turk had his best season with the Cubs in 1996 (getting 18 saves), but he later pitched in the playoffs and World Series for the New York Mets.

~Josh Paul 1975– (Cubs 2003)
The local product (Evanston) was released by the White Sox after a few years on the south side and was picked up by the Cubs. If you blinked, you missed his time with the Cubs. He had exactly six plate appearances that year and didn’t get on base. He made his mark in history a few years later as the catcher of the Angels when he rolled the ball to the mound after a strikeout by White Sox hitter A.J. Pierzynski in the 2005 playoffs. The umpire incorrectly ruled the ball hit the dirt and allowed Pierzynski to run to first base. The Sox came back to win the game, and with the undeserved momentum they attained, never lost again in the playoffs. Without that bad call, the 2005 Sox probably wouldn’t have won the World Series. Historians will forever put an asterisk next to that World Series title. Right?

~Fritzie Connally 1958– (Cubs 1983)
Fritz is one of eight players in big league history named Fritz. He got ten at-bats for the Cubs in 1983 and got one hit. There’s an outside chance that the name Fritz will make a comeback, but until it does, Connally will remain the final big league Fritz. He was a third baseman.

~Pop Williams 1874–1959 (Orphans/Cubs 1902-1903)
Williams was 11-16 with a 2.49 ERA, and 27 complete games in his first season with Chicago. The team wanted him back the next year, but he was coaching the Bowdoin College baseball team. He decided to give it one more shot, but it only lasted one game. He started a game, and decided Chicago was no longer the place for him. He later pitched for the Phillies and the Braves.