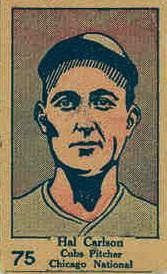 ~Hal Carlson 1892–1930 (Cubs 1927-1930)
Hal Carlson was a veteran starting pitcher acquired by the Cubs in 1927 from the Pittsburgh Pirates. He pitched for them for several seasons, and didn’t make much of an impact. Hal was never one of their best starters, but he was valuable enough to make the postseason roster in 1929, and did make two appearances in the World Series. In 1930, the Cubs had an offense that would have made any pitcher happy to take the mound on their behalf. Carlson was in great spirits. He won four of his first six starts, and was pitching well. Unfortunately, one night in late May, the 38-year-old started having horrible stomach cramps. He had been suffering from ulcers for a couple of years, so he wasn’t too worried about it at first. But when the pain got worse, he called teammates Riggs Stephenson, Kiki Cuyler, and Cliff Heathcote asking them to come to his apartment and help. When they saw what kind of pain he was suffering, his teammates called the team doctor, but it was too late. By the time the doctor arrived at the apartment, there wasn’t anything he could do. Carlson died that night of a stomach hemorrhage. The Cubs dedicated the season to their fallen comrade.

~Carlos Pena 1978– (Cubs 2011)
Carlos was a former All-Star, Gold Glover, and Silver Slugger when he signed with the Cubs as a free agent in 2011. Both sides knew it would be a short term arrangement. Pena held up his side of the bargain by hitting 28 homers and knocking in 80 runs. But he also hit only .225. When the season ended, the two sides agreed to part ways. Pena is also known for being an incredible humanitarian. He gave food and medical supplies after the Haiti earthquake in 2010, and was nominated for the Roberto Clemente Award. Carlos was forever immortalized in the film Moneyball starring Brad Pitt. Turns out, despite his great skills, Pena was the anti-Moneyball player.

~Porfi Altamirano 1952– (Cubs 1984)
He was simply the greatest Porfi to ever play in the big leagues. Altamirano pitched for the Cubs during their division winning season of 1984, and didn’t do too badly. After the season he was traded to the Yankees and never made it back to the majors again.

~Billy Hoeft 1932–2010 (Cubs 1965-1966)
Billy was a former All-Star pitcher when he came to the Cubs (he had won 20 games in a season for the Tigers). However, by the time he put on his Cubs uniform, he was no longer pitching at that level. He was used mostly in relief by Chicago, and pitched quite well; a 2.81 ERA. It didn’t last, unfortunately, and Billy was let go before the end of the 1966 season. One of Billy’s claims to fame is that he gave up the first home run of Harmon Killebrew’s career.