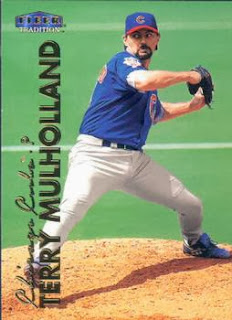 ~Terry Mulholland 1963– (Cubs 1997-1999)
He was a mediocre starting pitcher for the Cubs in 1997, but Mulholland was a key contributor out of the bullpen during their wild card season of 1998. He was the main lefty setup man, and when Rod Beck was resting his tired arm, Terry filled in for him. He finished 14 games and recorded three saves. He also made a few key starts for the Cubs when their starters were injured. After the Cubs got off to a slow start in 1999, he was traded to the Atlanta Braves for a few prospects who didn’t pan out. Mulholland probably appreciated the change of scenery. The Braves went to the World Series. In 20 career seasons in the big leagues, Mulholland won 124 games for the Giants, Phillies, Mariners, Pirates, Dodgers, Indians, Twins, Diamondbacks and Cubs. (Photo: Fleer 1999 Baseball card)

~Dale Alderson 1918–1982 (Cubs 1943-1944)
Dale was one of the bright young pitching prospects in the Cubs minor league system. He got a cup of coffee with the team in 1943, and again in 1944, and would have had a real chance to contribute in 1945, but Uncle Sam had other ideas for Dale. He served in the military for the entire 1945 season at the Naval Training Center in San Diego, where he remained until discharged on October 19, 1945, just nine days after the Cubs lost game 7 of the World Series to the Detroit Tigers. Alderson never made it back to the big leagues again

~Benito Santiago 1965– (Cubs 1999)
Santiago was a four-time all-star, three-time Gold Glover, a Rookie of the Year, and of course, none of that occurred during his time with the Cubs. He was signed to a one-year deal by the Cubs after a horrible automobile accident almost ended his career in 1998. It was considered a reasonable gamble because the price was right, and it was a short term deal. The Cubs brass was right about one thing: Santiago still had a few good seasons in that bat and arm. Unfortunately, it didn’t happen on the Cubs. Three years after leaving Chicago he led the Giants to the World Series, and was named the NLCS MVP. His big league career lasted an impressive twenty seasons.

~Koyie Hill 1979–(Cubs 2007-2011, 2012)
Koyie was a backup catcher for most of his time in a Cubs uniform, but he’s not really remembered for anything he did behind the plate or with the bat. He’s remembered for a horrific injury he was able to overcome. He was using a table saw and his hand got caught in the blade, severing his thumb and damaging his fingers. He, somehow, miraculously was able to continue playing baseball. One other bit of Koyie Hill trivia: he was the catcher who went in the game to replace Michael Barrett after Barrett and Carlos Zambrano got into a fistfight during a game on June 1, 2007.

~Clay Rapada 1981– (Cubs 2007)
Rapada made his major league debut with the Cubs on June 14, 2007. The Cubs were facing the Seattle Mariners in an interleague game at Wrigley Field. Rapada was called in from the pen in the top of the eighth inning to face Raul Ibanez. The Mariners were up 4-3 at the time and there were runners on first and second. Rapada induced a harmless lineout to the right fielder, and was pulled for Bobby Howry. Ibanez was the only batter Rapada ever faced in a Cubs uniform. He was sent back down to the minors after the game, and was traded to the Tigers later that season for Craig Monroe. He has since pitched for the Rangers, Orioles, Yankees, and Indians.