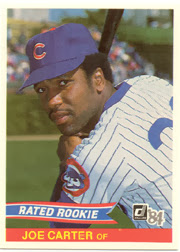 ~Joe Carter 1960 (Cubs 1983)
The Cubs had the second pick in the 1981 draft, and for once, they didn’t blow it. They chose Joe Carter. Carter would go on to be a five-time All-Star, hit nearly 400 career homers, steal more 200 career bases, and hit a walk-off home run to win the World Series. He did all of this, of course, for other teams. The Cubs traded Carter to the Indians in 1984. He was the key to the Rick Sutcliffe trade. In fairness to the Cubs, that trade did secure a division championship in 1984 (and 1989). Carter’s career totals on the Cubs (all in 1983) are as follows: one double, one triple, one RBI, one stolen base and a .176 batting average in 51 at bats. His career did come full circle, however. He made the last out in the 1998 one-game playoff against the Cubs at Wrigley Field, a popup to Mark Grace. That was the last at-bat of his career. Carter later also spent an unsuccessful year as a Cubs broadcaster.

~Merwin Jacobson 1894–1978 (Cubs 1916)
Merwin had one of the strangest big league careers you’ll ever see. He played sparingly for the Giants in 1915, and the Cubs in 1916 (their first season at what is now known as Wrigley Field), but then went down to the minors and played there for ten long years. He got one more shot in the majors with the Brooklyn Dodgers in 1926 and got his first significant playing time as the team’s fourth outfielder. He was not a power hitter. Of his 76 career hits (71 of which were for the Dodgers), he only got 11 extra base-hits (nine doubles and two triples).

~Ed Bouchee 1933–2013 (Cubs 1960-1961)
Bouchee had a couple of decent years with the Phillies in the 1950s, but he was also arrested and pled guilty to exposing himself to young girls. He was still on probation when the Cubs inexplicably traded for him in 1960. They thought they didn’t have a first baseman on their roster, but discovered in 1961 that there was someone named Ernie Banks who could play the position. Bouchee’s time in Chicago was uneventful. He hit 17 homers over two seasons and was left unprotected in the 1962 expansion draft. The Mets took him and he played on the worst team in history that year.

~Jimmy Hall 1938– (Cubs 1969-1970)
Hall’s career started out well with the Minnesota Twins. He was All-Star in 1964, and got to replace Mickey Mantle in centerfield that game. In 1965, he made the All-Star team again, but when the Twins went to the World Series, he spent most of it on the bench. By then his inability to hit lefties had been exposed, and a little-known lefty named Koufax started three games for the Dodgers in that series. By the time the Cubs got him in 1969 to help with their playoff push, the pitchers had caught up to him. He hit less than .200 and was shipped off to Atlanta in June of 1970.

~Randy Stein 1953–2011 (Cubs 1982)
Randy pitched for the Brewers and Mariners before finishing up his career with the Cubs. He went out in style, however. In his last big league appearance on September 22, 1982, he pitched three scoreless innings against the Mets in Wrigley Field. He didn’t have many appearances like that. His career ERA was 5.72. Randy died after a long battle with Alzheimer’s disease.