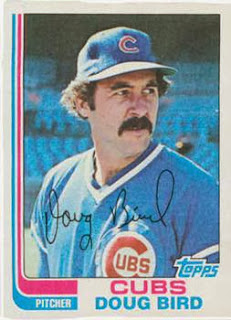 ~Doug Bird 1950– (Cubs 1981-1982)
Bird was an important part of the Kansas City bullpen throughout most of the 1970s, but when he was acquired by the Cubs (from the Yankees) in 1981, they thought he would make a better starter. They were wrong. He started 45 games for the Cubs in 1981 and 1982, and allowed more home runs than any other pitcher in baseball (31). While it’s true they gave up their best pitcher (Rick Reuschel) to acquire Bird, they gained something that Reuschel never would have been able to provide. A world class mustache. (Photo: 1982 Topps Baseball Card)

~Jim Gleeson 1912–1996 (Cubs 1939-1940)
The Cubs were reigning NL Champs when Gleeson joined the team is (his teammates nicknamed him “Gee Gee”). Gleeson got quite a bit of playing time in the outfield during his time in Chicago, including his best season in the big leagues, 1940. That year he was the team’s starting centerfielder and hit over .300. The Cubs traded him after the season and he finished his playing career in Cincinnati. Gee-Gee later coached and scouted for several teams including the Yankees, and was the first base coach for the Yanks when they won the 1964 World Series.

~Dick Errickson 1912–1999 (Cubs 1942)
He was born on the exact same day as fellow Cub Jim Gleeson (above), but they were never teammates. Errickson was a relief pitcher. It should come as no surprise that Errickson was nicknamed “Lief” by his teammates. He pitched his final game in the big leagues as a Cub. In the first game of a double-header against his former team the Boston Braves on September 13, 1942, he was lit up for five hits and three runs in an 11-6 loss.

~Kyle Schwarber 1993– (Cubs 2015-present)
The Cubs top draft pick in 2014 wasn’t supposed to make it to the majors this quickly, but he absolutely crushed minor league pitching and the Cubs couldn’t resist bringing him up to the big leagues. They weren’t disappointed. In only 273 ABs, Kyle slugged 16 homers — and none of them were cheapies. In the playoffs he added five more — setting an all-time Cubs postseason record in his very first season. One of them will remain a fixture in Cubs lore. Against the hated Cardinals, Schwarber put a homer ON TOP of the video board in right field. In his third game of the 2016 season, unfortunately, Schwarber severely injured his knee and was ruled out for the season. It appeared he wouldn’t be able to participate in their World Series-winning season. But somehow, miraculously, he was activated right before the World Series began and served as the DH in Cleveland. Schwarber didn’t just show up, he inspired his entire Cubs team. He hit over .400, knocked in two runs, and even stole a base in the decisive Game 7 victory. The Cubs convinced themselves that Kyle was a lead-off hitter, and that’s where he began the 2017 season. He struggled so badly there, they had to send him back to the minors. Schwarber got his act together in Triple A and when he came back up he was a different player. He ended the season with 30 homers. His postseason magic, however, was no longer there. Schwarber hit less than .200, although one of his three hits was a homer. In 2018 he played the whole season with the big league club as the (more or less) regular left fielder. He hit .238 with 26 homers. The fan favorite probably had his best year in a Cubs uniform in 2019. He led the team in homers (38), drove in over 90 runs, and raised his average to .250.