~Art Bues 1888 (Cubs 1914)
Art may have had a slight advantage when he made it up to the big leagues in 1913 to play for Boston. The manager of the team was his uncle, Gentleman George Stallings. But he made it on his own in Chicago the following year. On a team that featured the last two members of the Cubs dynasty (Wildfire Schulte and Heinie Zimmerman), Bues backed up third base and got 45 at bats, in a year when the crosstown Chi-Feds outdrew the Cubs because of their brand new ballpark (now known as Wrigley Field)

~Joe Jaeger 1895 (Cubs 1920)
His teammates called him Zip. Zip played in exactly two games with the Cubs. The team brought him in to help out in the bullpen on days they had double headers. The first time he came in was on July 28, 1920. He relieved Hippo Vaughn and gave up two runs on three hits in an 8-4 loss. The final game on the Cubs (and in the majors) was on September 6th of that year. He didn’t have good control. He walked three, gave up three hits and four earned runs. His final ERA was 12.00.

Bonus…on this day in Cubs history 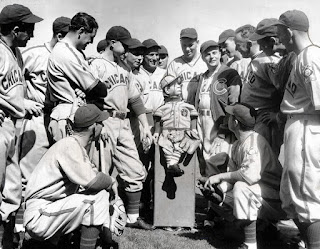 On this day in 1939, the Cubs arrived at their Spring Training facility on Catalina Island in California. They were the defending National League champions. During the time the Cubs trained in California, in the years before a big league team had moved out west, the Cubs were the toast of Hollywood.

Every year they were sure to get a visit from one big movie or radio star. In spring training of 1939, their visitor was the biggest dummy in America, Charlie McCarthy, along with his ventriloquist Edgar Bergen. There are three Cubs Hall of Famers in the picture. Can you spot them? Gabby Hartnett, Billy Herman, and Dizzy Dean. (Dizzy is the one right behind Charlie looking down on him)