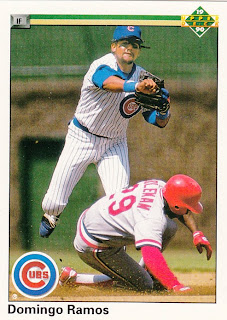 ~Domingo Ramos 1958– (Cubs 1989-1990)
Domingo was a backup infielder for the Yankees, Blue Jays, Mariners, Indians, and Angels before coming to the Cubs in 1989. Ramos proved be an invaluable member of that division winning Cubs team in 1989. He got the most extensive playing time of his career that year, hitting .263 while backing up Shawon Dunston at shortstop and Vance Law at third. He had another good year the following season, but the Cubs opted not to sign him for 1991, so Domingo retired. (Photo: 1990 Upper Deck Baseball Card)

~Karl Pagel 1955– (Cubs 1978-1979)
Pagel was the first round pick of the Cubs in 1976, and unlike several of their top picks of that decade, he did make it to the big leagues. He got exactly three at bats for the Cubs, two in 1978, and one in 1979. He struck out all three times. In fairness to the Cubs, 1976 wasn’t a particularly strong draft. Only one player chosen in the top two rounds got extensive playing time in the majors–and that was Hubie Brooks. Pagel was traded to the Indians for aging slugger Cliff Johnson in 1980, and later played a bit for the Indians (1981-1983). He hit his only career homer for the Indians in 1981.