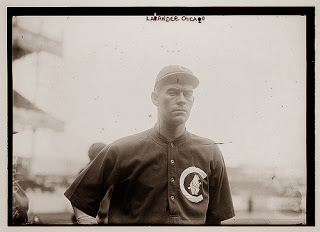 ~Jimmy Lavender 1874–1960 (Cubs 1912-1916)
Jimmy won only 63 games in his MLB career (all but six of them for the Cubs), but for one glorious day, he was unhittable. On August 31, 1915, he made his mark in history. Lavender pitched a no-hitter in the first game of a double header in New York against the Giants. He walked one and struck out eight. With the victory, the Cubs got back to .500. Unfortunately, they lost the second game and fell back under. 1915 was the last season the Cubs played their home games at West Side Grounds, and it was a year of transition for the team. Among Lavender’s teammates that season were the last two remaining members of the 1908 Champs (Wildfire Schulte & Heinie Zimmerman), and the man who would lead them to the World Series a few years later, pitcher Hippo Vaughn. (Photo: Chicago Daily News)

~Brad Hogg 1889–1935 (Cubs 1915)
Hogg pitched in two games for the Cubs during their last season in West Side Grounds, including a complete game shutout. He finished up his career in Philadelphia with the Phillies in 1919.

~Joe Klugmann 1895–1951 (Cubs 1921-1922)
Klugmann played in the minors for many years, but only had a few opportunities in the big leagues. He got his first shot with the Cubs in 1921. He was 26 years old at the time. In his two seasons in Chicago he only got into eight games. Klugmann later played for the Dodgers and Indians. He became a manager after his playing career was over.

~Jack McCarthy 1869–1948 (Orphans 1900, Cubs 1903-1905)
Jack was a starting outfielder for the Cubs for a few seasons, but he wasn’t considered anything special. He was part of the package that was offered to Brooklyn to acquire Jimmy Scheckard, who became one of the key members of the Cubs championship dynasty. Since 1900, no player has more at bats without hitting a home run than Jack. McCarthy went 2736 at bats without one after hitting his last homer in 1899.

~Jose Vizcaino 1968– (Cubs 1991-1993)
Jose had a long and impressive big league career. For most of his 18 seasons he was a valuable backup infielder, but with the Cubs he got a shot as a starter. In 1993 he spent the year as the Cubs starting shortstop, and posted some of the best numbers of his career. Jose hit .287, knocked in 54 runs, and stole 12 bases. After the season the Cubs traded him to the New York Mets for Anthony Young. Jose played for nine teams in the big leagues, and two of them made the World Series. His 2000 Yankees team beat the Mets, and his 2005 Astros team lost to the White Sox.

~Jason Maxwell 1972– (Cubs 1998)
Maxwell was a September call up during the Cubs Wild Card season of 1998. Because every game mattered, the infielder didn’t get many opportunities. He was used as a pinch hitter, and did hit one homer in his three at bats. It came in a 13-11 loss against the Brewers. Sammy Sosa hit his 59th homer in the same game. The Cubs cut Maxwell during spring training in 1999, and he later had a cup of coffee with the Minnesota Twins.

~Rob Zastryzny 1992– (Cubs 2016-present)
The Canadian born Zastryzny came up at the end of the year and pitched in some important games for the Cubs. He pitched so well (1.13 ERA in eight appearances, 17Ks in 16 IP), that the Cubs named the lefty to the postseason roster for the NLCS against the Dodgers. He didn’t appear in any of the games. Zastryzny spent nearly the entire 2017 and 2018 seasons in the minors. He was called back up ever so briefly both years, but didn’t have much success.