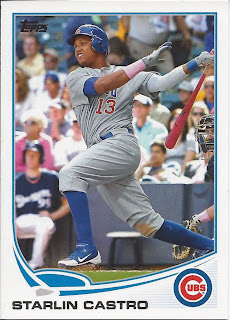 ~Starlin Castro 1990– (Cubs 2010-2015)
The Dominican shortstop burst onto the scene as the youngest player in the big leagues (age 20) in 2010, and was an immediate smash. He hit .300 as a rookie, became an All-Star, led the league in hits in his second year, and improved his power numbers and made the All-Star team again in his third year. But in 2013, the train went off the tracks. The Cubs tried to tinker with his approach at the plate to get him to take more pitches, and Castro suddenly looked lost. His play at shortstop, which had already been inconsistent, got worse. Then in 2014, he suddenly rediscovered his hitting stroke, and once again was named to the All-Star team. His 2015 season was a microcosm of his Cubs career. His first half was so terrible, he was replaced as the starting shortstop. After being moved to second base, he hit over .400 during August. The roller coaster ride finally came to end when the Cubs traded him to the Yankees after the 2015 season. (Photo: Topps 2013 Baseball Card)

~Jim McCauley 1863–1930 (White Stockings 1885)
McCauley was a catcher and outfielder for the Cubs (then known as the White Stockings) in 1885 for a grand total of three games. He got one hit. Jim played small parts of three seasons in the big leagues, never quite catching on with Chicago, St. Louis, Providence or Buffalo (both of whom were big league franchises at the time), but he must have loved the game because McCauley played in the minor leagues until 1897.

~Jamie Arnold 1974– (Cubs 2000)
He was a first round pick of the Atlanta Braves, but Jamie Arnold never quite lived up to his billing. The Cubs got him in a trade (for Ismael Valdes), and tried him in the rotation and the bullpen, but he didn’t pitch well in either role. In twelve appearances with the Cubs, he had an ERA of 6.61. He never pitched in the big leagues again. In eleven minor league seasons, Arnold was 23 games under .500.

~Chad Gaudin 1983-– (Cubs 2008)
The Cubs acquired Chad in the trade that brought Rich Harden to the team in July of 2008 (for Matt Murton and Eric Patterson). While Harden showed flashes of brilliance, Gaudin did not. He was hit hard, and hit often. His ERA with Chicago was 6.26. The Cubs released him the following April thinking his career was done, but Gaudin surprised everyone. He has since pitched for the Padres, A’s, Nationals, Marlins, Giants, and the Yankees. That 2009 Yankees team won the World Series.