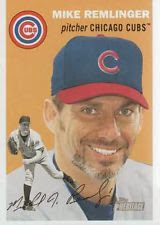 ~Mike Remlinger 1966– (Cubs 2003-2005)
Jim Hendry was big believer in signing veteran relievers, and Remlinger was one of the guys he brought in to help put that 2003 team over the top. He was in his eleventh season in the big leagues (having already pitched for Atlanta, Cincinnati, the Mets and the Giants) when he joined the Cubs. Remlinger had a decent year, but the Cubs bullpen overall was very shaky during an otherwise impressive year. The following year Remlinger was hurt while sitting in his La-Z-Boy chair. True story. Remlinger’s other claim to fame may have been that he picked up (and kept) a portion of Sammy Sosa’s infamous broken corked bat as a souvenir. Remlinger was traded to the Red Sox in 2005. (Topps 2003 Baseball Card)

~Peaches Graham 1877–1939 (Cubs 1903,1911)
Peaches had two different stints with the Cubs. The first one was ever so brief. He pitched in one game in 1903, and got knocked around (nine hits, six runs). After spending five years in the minors, he re-emerged in the big leagues as a catcher in Boston. He had three-plus productive seasons there with the Braves before the Cubs reacquired him for Johnny Kling in June of 1911. Peaches was the main backup catcher (to Jimmy Archer) the rest of the season. His son Jack later played in the big leagues too (for the Dodgers, Giants, and Browns).

~Joel Peralta 1976-– (Cubs 2016)
The Cubs were looking for bullpen help during the summer of 2016, so when the 40-year-old Peralta was released by the Mariners, the Cubs gave him a chance. After giving up two homers in only four innings of work, the Peralta experiment ended. Peralta previously pitched for the Angels, Royals, Rockies, Nationals, Rays, and Dodgers during his 12-year big league career.

~Cy Slapnicka 1886–1979 (Cubs 1911)
Cy pitched pretty well for the Cubs, but went back to the minor leagues after the season, and didn’t return to the big leagues until he got a cup of coffee with the Pittsburgh Pirates in 1918. But that was not the end of Slacknicka’s baseball career by a long shot. He stayed in the game for fifty years, working mainly as a scout for the Cleveland Indians. Among the players he discovered and signed; Hall of Famers Bob Feller and Lou Boudreau. In both cases there were some shenanigans involved in the signing. Feller was only sixteen years old–and Slappy got called in to see Commissioner Landis about that. (The Indians had to pay a fine) In Boudreau’s case, his mom received a $100 a month allowance while Lou was playing at the University of Illinois. Boudreau was banned from college sports when the news got out, and had no choice but to sign with the Indians. Those two players signed by Slapnicka led the Indians to a World Series championship in 1948.

~Johnny Moore 1902–1991 (Cubs 1928-1932, 1945)
Johnny was the starting centerfielder for the 1932 NL Champion Cubs, but went 0 for 7 in the World Series and was traded in the offseason to the Cincinnati Reds for Babe Herman. By 1938, Moore was in the minor leagues, playing in the sunshine of Southern California. He played eight full seasons there, and figured his big league career was over, but in September of 1945 as the Cubs were heading toward the World Series, the big club called him up for one last shot. Johnny Moore appeared as a pinch hitter six times, got one hit (a single), and then gave up baseball for good. He was 43 years old.