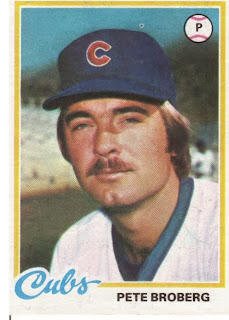 ~Pete Broberg 1950 (Cubs 1977)
Pete was a first round pick of the Washington Senators in 1971, but could never quite harness his control. He led the American league in hit batsmen in two different seasons before the Cubs acquired him. Broberg pitched only 36 innings for the Cubs in 1977. He was a little wild for the Cubs too (18 walks in 36 innings) and a little hittable (8 home runs allowed in 36 innings) but his mustache helped anchor an impressively mustachioed bullpen. The Cubs traded him to the A’s the following year, Broberg’s last season in the majors. (Photo: Topps 1978 Baseball Card)

~Butch Weis 1901 (Cubs 1922-1925)
Butch was teammates with both of guys listed above. There are no reports of three of them hanging out together or celebrating on their birthday, but if they did, they couldn’t have legally gone out drinking. They played during Prohibition. Butch was a backup outfielder, and not related to the gangster Hymie Weis, who was gunned down in front of Holy Name Cathedral during Butch’s time on the Cubs. Butch’s best season was his last one (1925). He hit the only two homers of his career that season.

~Mort Cooper 1913 (Cubs 1949)
He was a four-time all-star and former NL MVP (Cardinals 1942) before he came to the Cubs, but he clearly had nothing left in the tank in Chicago. He pitched exactly once for the Cubs on May 7, 1949. He faced three batters in the fourth inning that day (in relief of Bob Rush). He walked the first batter, Pee Wee Reese. He then threw a wild pitch to Gene Hermanski, before eventually giving up a single to him. His last batter was Duke Snider, and the Duke took him out of the ballpark. Mort was yanked and never pitched again. Despite a very good MLB career (128 wins, 33 shutouts, and a 2.97 lifetime ERA), Cooper’s final ERA with the Cubs was infinity.