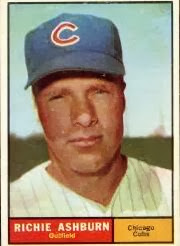 ~Richie Ashburn 1927–1997 (Cubs 1960-1961)
While it was great to have the Hall of Famer Ashburn covering centerfield for the 1960 and 1961 Cubs, the lifetime .308 hitter was long past his prime. He put up those Hall of Fame numbers mostly for the Philadelphia Phillies. The stories about Ashburn from his early days are legendary. He loved hitting so much he slept with his Louisville Slugger when he was in slump. He was a speedy singles hitter who won two batting titles, finished second three times, and hit over .300 nine times. By the time he came to the Cubs, unfortunately, his career was declining and he no longer had the speed he exhibited early in his career. Ashburn was a five time All-Star, but none of those appearances came with the Cubs. The Cubs let him go in the expansion draft of 1962, and he finished his career as the only All-Star on the worst team of all-time, the 1962 Mets. After his playing career ended, he became a beloved announcer for the Philadelphia Phillies. He died in 1997, two years after he was elected into Baseball’s Hall of Fame. (Photo: 1961 Topps Baseball Card)

~Garry Jestadt 1947– (Cubs 1971)
Jestadt was an infielder (2B, 3B), but his career with the Cubs was incredibly short. At the beginning of the 1971 season he was on the roster long enough to log a total of three at bats (no hits), and play three total innings in the field (at 3B, spelling Ron Santo). The Cubs traded him in May of that year to the San Diego Padres. In San Diego he got the most extensive playing time of his big league career.

~Paul Smith 1931– (Cubs 1958)
Smith was acquired from the Pirates during the 1958 season, and got a cup of coffee with the Cubs. He was mainly used as a pinch hitter, although he did log some time at first base as well. Unfortunately for Paul, he didn’t hit well (.150), and was sent to the minors in June. He stayed in the game another six years, but never returned to the big leagues.

~David Ross 1977– (Cubs 2015-2016)
Ross was in his 14th big league season when he was acquired by the Cubs. He had previously caught for the Dodgers, Pirates, Padres, Reds, Braves and Red Sox. The Cubs mainly got him because of his relationship with their new ace pitcher Jon Lester. Ross had served as Lester’s personal catcher in Boston. He didn’t hit well for the Cubs, but he did provide an important veteran voice in the clubhouse, and was one of the team’s undisputed leaders. He even pitched in a few blowouts, posting a perfect ERA. In 2016, Grandpa Rossy, as he was known by his teammates, announced that it would be his last season. He made the most of it, slugging ten homers, catching a no-hitter (by Jake Arietta), and winning the World Series. His teammates seemed to dedicate that World Series win to Ross–easily the most popular player in the Cubs clubhouse.