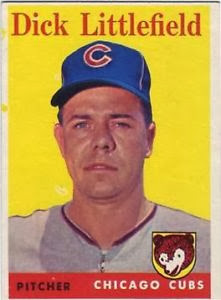 ~Dick Littlefield 1926–1997 (Cubs 1957)
Littlefield was the very definition of the well-travelled journeyman pitcher. Before coming to the Cubs, he pitched for the Browns, White Sox, Tigers, Orioles, Pirates, Cardinals and Giants. His best season in the big leagues was probably 1954, when he won ten games for the Pirates. With the Cubs he was used almost strictly in relief. He saved four games, but also struggled with his control (a career long issue) and the long ball. In his only Cubs season he gave up 12 homers in only 68 innings. Littlefield’s claim to fame is probably the fact that he was the only person ever traded for Jackie Robinson. The Giants traded him to the Dodgers for Robinson, but Jackie refused to report, and retired instead.

~Hiram Bithorn 1916–1951 (Cubs 1942-1946)
Bithorn was from Puerto Rico, the first Puerto Rican to ever play Major League baseball. Known for his high leg kick, he had one great season with the Cubs in 1943, winning 18 games with seven shutouts, and an ERA of 2.60. Unfortunately, he was drafted into the military during World War II, and after he returned from the Navy he had gained 45 pounds. Bithorn tried to pitch for the Cubs in 1946, but didn’t have anything left in the tank. The two-year layoff was too much to overcome. His life took a tragic turn while he was trying to make a comeback in the Mexican League. On New Year’s Day in 1952, he was shot to death by a policeman in Mexico, in what is still considered a mysterious case. Bithorn is still a hero in Puerto Rico. The baseball stadium in San Juan is named Hiram Bithorn Stadium.

~Jimmy Callahan 1874–1934 (Orphans/Colts 1897-1900)
The newspapers at the time liked to call him by his childhood nickname Nixey. He was mainly a pitcher, and a good one at that, but he could also hit, and he had blinding speed, so the Cubs (then known as the Colts and Orphans) found ways to get him on the field even on days he wasn’t pitching. He played a little outfield, and a little third base. On the mound, though, is where Jimmy Callahan really made his mark. When Jimmy went out there to pitch, the Cubs knew he was going to finish what he started. Out of 116 starts, 113 of them were complete games. One of the most memorable probably came on July 4th, 1900. The Cubs drew a big crowd that day for Independence Day, and hundreds of fans arrived with guns. They shot off their guns in celebration when Nixey and Chicago won the game 5-4. When the American League was founded he jumped across town with Clark Griffith and finished his career with the White Sox. While pitching for the White Sox, Callahan hurled the first no-hitter in American League history. Jimmy still holds two Cubs records that will never be broken. On September 6, 1900, he allowed 25 hits and 20 runs in one game.

~Fernando Rodney 1977– (Cubs 2015)
The Cubs picked up the former All-Star closer from Seattle at the end of August to augment their bullpen for the playoff run. Though clearly on the downside of his career, Rodney did provide a few important bullpen innings for them, and posted a sterling 0.75 ERA in the last month of the season. In the playoffs it didn’t go quite as well. He was one of four Cubs pitchers to serve up a long ball to Daniel Murphy of the Mets in the NLCS.