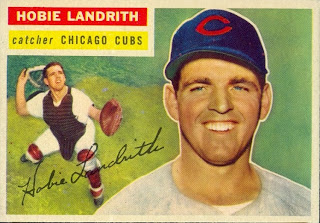 ~Hobie Landrith 1930– (Cubs 1956)
Hobie was a catcher who lasted fourteen seasons in the big leagues, including 1956 with the Cubs. That season Hobie got over 300 at bats for the only time in his career, but he didn’t take advantage of the opportunity. He led all big league catchers in errors, and only hit .221. The Cubs traded him to the Cardinals after the season. He also played for the Reds, Giants, Mets, Orioles, and Senators. After his playing career he went to work for Volkswagen.(Photo: Topps 1956 Baseball Card)

~Walt Kinzie 1858–1909 (White Stockings 1884)
Kinzie was a backup infielder for the 1884 Cubs (then known as the White Stockings). He had an uneventful big league career and finished with a .132 lifetime batting average. After his career ended, he settled in Chicago, and when he died in 1909, he was buried in Graceland Cemetery. At the time, the cemetery was just a few blocks away from a Lutheran Seminary. That seminary’s former location now houses Wrigley Field.

~Vic Keen 1899–1976 (Cubs 1921-1925)
Keen was the fifth starter and swingman on a Cubs staff that also featured Hall of Famer Grover Cleveland Alexander. He won 12 games in that capacity in 1923. In ’24, they moved him into the rotation full-time and Vic responded with his best big league season. He and another Vic, Vic Aldridge, each won 15 games that year. The Cubs traded him to the Cardinals in 1925 for slick-fielding shortstop Jimmy Cooney.

~Ken O’Dea 1913–1985 (Cubs 1935-1938)
Ken was primarily Gabby Hartnett’s backup during his tenure with the Cubs. The Cubs were very good during those years, and O’Dea played an important role. He got some playing time in both the 1935 and the 1938 World Series for the Cubs, and responded with key hits in each series, including a homer off Hall of Famer Red Ruffing in 1938. After that series, O’Dea was traded to the Giants along with Billy Jurges and Frank Demaree for Dick Bartell, Hank Leiber, and Gus Mancuso. He stayed in the big leagues until 1946, and won two World Series as a member of the St. Louis Cardinals (1942 & 1944)

~Vern Olsen 1918–1989 (Cubs 1939-1946)
Olsen’s big league career was interrupted by a three year tour of duty in the military. He was a member of the Cubs starting rotation before the war, notching two seasons of double-digit wins. But while the Cubs were on their way to the World Series in 1945, Olsen was stationed in Hawaii. When he came back in 1946, he was a shell of his former self. The Cubs released him after the season.

~Scott Simon 1952– (Cubs fan 1952-present)
Scott Simon ia an author and NPR radio host, but he’s also a Cubs fan. How big of a Cubs fan is he? This is from official bio…”Scott is a native of Chicago and the son of comedian Ernie Simon and Patricia Lyons Simon. His hobbies are books, theater, ballet, British comedy, Mexican cooking and ‘bleeding for the Chicago Cubs.'” Simon also wrote a book that tells all about his Cubs love (in addition to his love of the other Chicago sports teams) called “Home and Away: Memoir of a Fan”. It was published in the spring of 2000, and topped the Los Angeles Times nonfiction bestseller list for several weeks. One of the best passages of that book was about the 1969 Cubs. Scott Simon is no longer based here, and he is not really a Chicagoan any more, but can there ever be a doubt how deeply the Cubs virus has bored its way into his system?

~Hee Seop Choi 1979– (Cubs 2002-2003)
The Cubs were convinced he was their first baseman of the future. Choi was an impressive physical specimen, 6’5″, 230 pounds, and displayed tremendous power in the minor leagues. He hit 26 homers and drove in 97 runs at Triple-A Iowa in 2002, and was the opening day first baseman at Wrigley Field in 2003. He was off to a decent start but suffered a concussion when he crashed into Kerry Wood while chasing a pop fly in June of that year. The Cubs went on to the playoffs, but Choi was not a part of that run. He never reclaimed his starting job. Choi was traded before the 2004 season to the Florida Marlins for Derrek Lee.