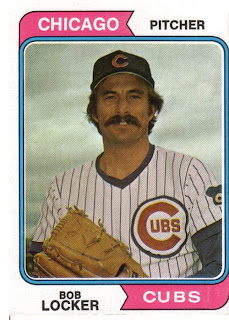 ~Bob Locker 1938– (Cubs 1973, 1975)
The Cubs traded one of their rare home-grown position players (Billy North) to get Bob Locker before the 1973 season. North was a speedy leadoff hitter that ignited the lineup of the World Champion Oakland A’s, and Locker was a 35 year old reliever. Admittedly, Locker wasn’t bad in 1973. He won ten games and saved another 18, but he was sent back to Oakland in 1974, where he sat out the year recovering from arm surgery. For some reason, the Cubs traded for him again in 1975. That time it only cost them Hall of Famer Billy Williams. Locker was toast. In his last big league season he appeared in 22 games and posted an ERA just shy of five. (Photo: Topps 1974 Baseball Card)

~Jon Jay 1985– (Cubs 2017)
The Cubs probably didn’t expect Jay to be their steadiest leadoff man in 2017, but that’s what the veteran free agent signing became. Jay played all three outfield positions, hit .296, had a .374 OBP, and made the pitcher work hard in every at bat. He became a free agent after the 2017 season. The well-traveled veteran has also played for St. Louis, Kansas City, San Diego, Arizona, and the White Sox.

~Roscoe Coughlin 1868–1951 (Colts 1890)
Roscoe’s ten-year baseball career was spent mostly in the minor leagues, but he did get a few tastes of the big time, including part of the 1890 season with Chicago. The Cubs (then known as the Colts) discovered him in the California leagues, and added the right-hander to the staff at the beginning of the season. He started ten games and completed all of them, but he didn’t wow anyone. The Colts released him in June. He got one more shot the following year with the New York Giants, but that was the extent of his big league career. He later fought in the Spanish American War.

~Doc Casey 1870–1936 (Cubs 1903-1905)
Casey was the switch-hitting third baseman who played alongside Tinker, Evers, and Chance in their formative years. By 1905, however, he was starting to lose his skills, and the Cubs traded him to Brooklyn while he still had some value. The player they got in return, outfielder Jimmy Sheckard, became a key member of the Cubs dynasty (1906-1910).

~Dick Scott 1933– (Cubs 1964)
The Cubs traded a very good prospect (pitcher Jim Brewer) to get the 30-year-old lefty Scott in December of 1963. It’s one of the biggest head-scratching deals in Cubs history. While Brewer went on to have a very productive big league career including an All-Star season with the Dodgers, Scott struggled mightily. He wasn’t even pitching well in the minors when they brought him up to the big club in July. They couldn’t possibly have been shocked when it didn’t go well. Scott was rocked hard. He pitched four innings, and gave up ten hits, including two homers. His final Cubs ERA was 12.46.

~Freddie Bynum 1980– (Cubs 2006)
The Cubs acquired Freddie just before the 2006 season began, and he got the most extensive playing time of his big league career during Dusty Baker’s last season in Chicago. Bynum played all three outfield positions and second base. He hit four homers and stole eight bases. The Cubs traded him to the Orioles the following spring for pitcher Kevin Hart. 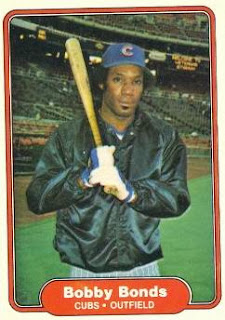 ~Bobby Bonds 1946–2003 (Cubs 1981)
Bobby Bonds was one of the most exciting players of his era. Unfortunately, his era came long before he became a member of the Chicago Cubs. He was already 36 years old when the Cubs got him from the Rangers in June of 1981, and he was nowhere near the dynamic superstar he was with the Giants, Yankees and Angels. In his first game with the Cubs he broke a finger trying to catch a fly ball, and didn’t even get up to bat. He did eventually get over a hundred at bats with the Cubs in the last season of his career, but he looked lost in the outfield. It was difficult to watch because this once electrifying outfielder was obviously no longer a major league player. He couldn’t field anymore, and he also couldn’t hit. Of his 332 career home runs, only six came for the Cubs. Of his 461 career stolen bases, only five came for the Cubs. He struck out 44 times in 163 at bats, and batted .215. Although Bonds was a borderline Hall of Famer, he never got the number of votes needed to make it. Certainly his last season with the Cubs didn’t leave a good taste in the mouths of HOF voters.