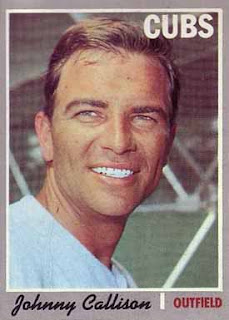 Johnny Callison 1939 (Cubs 1970-1971)
The Cubs acquired him in November of 1969, in a trade that they hoped would put them over the top. They traded pitcher Dick Selma (who had been a favorite of the Bleacher Bums because of his cheerleading routine from the bullpen) and a young prospect, to the Phillies for the former all-star outfielder. Unfortunately for the Cubs, that young prospect turned out to be Oscar Gamble. Gamble was only 19 years old at the time, but he had already gotten a taste of the majors with the Cubs. How did that trade turn out? Gamble played in the majors until 1985, hitting 200 home runs. Of those 200 home runs, only one of them came for the Cubs. He went on to play in the World Series for the Yankees, and hit .358 for them in 1979. Most horribly, his best season was with the Southside Hitmen 1977 Chicago White Sox. Callison had one semi-decent year in Chicago, then was done. Needless to say, he wasn’t the final piece to take them over the top. (Photo: Topps 1970 Baseball Card)

~George Moolic 1867 (White Stockings 1886)
George had one of the greatest nicknames in Cubs history. His teammates called him “Prunes”. He was a 19-year-old backup catcher and outfielder for the 1886 National League champs, but he didn’t make much of a contribution to the team. He hit only .143 in 56 at bats. That was the full extent of his big league career. Prunes may not have lasted long, but he could always say that he played on one of the most star-studded teams in Major League history. Among his teammates: Hall of Famers Cap Anson, King Kelly, and John Clarkson, plus stars in their day like Ned Williamson, George Gore, Jimmy Ryan, and Silver Flint. Oh, and the most famous of them all, future evangalist Billy Sunday. Prunes got a bloody nose in 1915 at the age of 47. Doctors couldn’t stop the bleeding, and after three weeks, he passed away. Official cause of death: nasal hemorrhage.

~George Maisel 1892 (Cubs 1921-1922)
Maisel had a very unusual big league career. He got his first shot with the St. Louis Browns way back in 1913, and had another cup of coffee with the Tigers in 1916, but then languished in the minor leagues until the Cubs gave him a shot in 1921. He responded with a very good seaon. He started in centerfield for the Cubs, and was among the best fielding outfielders in the league that year. He also hit over .300 and stole 17 bases. But the 29-year-old was replaced by Jigger Statz the following year, and was finished at age 30. George had a brother (Fritz) and a cousin (Charlie) who also played in the big leagues.

~Bud Tinning 1906 (Cubs 1932-1934)
Bud was a long reliever and spot starter on some very good Cubs teams. He was a key contributor to the 1932 pennant winners, and pitched well in the World Series that year. He even struck out Babe Ruth. Tinning was even better in 1933, leading the league in winning percentage. After the 1934 season the Cubs traded him to the Cardinals. Unfortunately for Bud, he hurt his arm in 1935, ending his baseball career.