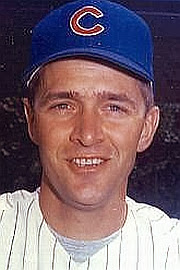 ~Jack Spring 1933–2015 (Cubs 1964)
He pitched for seven teams in his eight big league seasons, and for exactly one month that team was the Cubs. They acquired Jack in May of 1964, and he pitched in seven games over the next few weeks. But then on June 15, 1964, Spring was called into the manager’s office and told he had been traded again. This time he was the throw-in in the trade that sent Lou Brock to the Cardinals. In St. Louis, Spring won a ring (although he didn’t make the postseason roster that year). Not sure what happened to that Brock character. One of the most miraculous stats of Jack’s career is this little tidbit: He once went 19 consecutive outings without recording a strikeout. That’s the longest streak since 1957.

~Rich Hill 1980–(Cubs 2005-2008)
When he was a young lefthander coming up through the Cubs organization, the team really thought they had something special. Hill was tall (6’5″) and commanding on the mound, and he threw a wicked curve ball. In 2007, that took him a long way. He struck out 183 batters in 195 innings and won 11 games for the division winning Cubs. But the following year he couldn’t find the strike zone. The Cubs gave up on him and sold him to the Orioles before the 2009 season. He managed to stay in the big leagues as a specialty lefty reliever for several season In 2013 with the Indians, he pitched in 63 games, but didn’t even register 40 innings pitched. But Rich was put back into the starting rotation by the Oakland A’s in 2016 and after experiencing a resurgence was traded to the Dodgers. He shut out the eventual World Champion Chicago Cubs in the NLDS for the Dodgers, and has been an elite starter in the big leagues ever since.