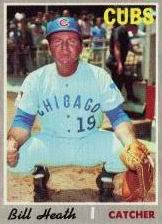 ~Bill Heath 1939– (Cubs 1969)
Bill Heath was a backup catcher for the Cubs in 1969, and with less than 200 career at bats, certainly qualifies as a “cup of coffee.” His story has a very dramatic ending by the way. Heath was catching on August 19, 1969. If you’re a real stats geek, you may remember that Ken Holtzman threw a no-hitter for the Cubs that day. Even though Heath started the game, he wasn’t around for that dramatic last out. Early in the game he was hit by a foul tip and broke his hand. Gene Oliver finished the game at catcher, and Heath was placed on the DL. He never played in the majors again. Ironically, Ken Holtzman’s second no hitter for the Cubs (June 3, 1971), also was caught by a cup-of-coffee backup catcher who rarely played (Danny Breeden). Breeden and his brother Hal were both on the Cubs for a very short time that year. After his playing days, Heath suffered an unspeakable tragedy. His wife and daughter were murdered in 1975, during a home invasion.(Photo: Topps 1970 Baseball Card)

~Gene DeMontreville 1873–1935 (Orphans 1899)
The Cubs (then known as the Orphans) got him in the Bad Bill Dahlen trade with the Orioles, and DeMontreville had big shoes to fill. Luckily, he came to Chicago with some credentials on his resume, including a 36-game hitting streak. Apparently the Cubs were not satisfied with the infielder’s performance, however, because he was traded back to the Orioles just a few months later. Turns out that Gene was a bit of a drinker and a brawler. Gene’s brother Lee also played in the big leagues, for the St. Louis Cardinals. Gene died in a fire in Memphis.

~Joe Campbell 1944– (Cubs 1967)
Joe was serving in the U.S. Marines when the Cubs took him from the Mets in the Rule V Draft. He finally arrived on May 3rd, and played his first and only game in the big leagues. He went 0 for 3 and struck out all three times. The Cubs returned him to the Mets after the game and he never made it back up the majors. In that one game, however, Campbell can say that he was in the same lineup as three Hall of Famers (Banks, Santo, and Williams), and that the other lineup included Felipe Alou, Joe Torre, Rico Carty, and one of the best hitters of all-time, Hank Aaron.

~Darcy Fast 1947– (Cubs 1968)
Darcy was a hard throwing lefty in the Cubs bullpen in the late 1960s, but only had a cup of coffee with the big league team in 1968. In eight appearances covering ten innings, he struck out ten batters…but he also walked eight. He never returned to the big leagues after that. Darcy has written a book about his life, called “The Missing Cub”. From the website, here’s a blurb for the book: “Darcy’s story is the stuff of dreams. Dreams once realized, and then lost, and then found again. It is, in many ways, a narrative of what every boy growing up dreams, but cannot achieve. More importantly, though, his is a story that could be ours as well. And that’s what makes this book a must read. Maybe, just maybe, by reading Darcy’s story, you will find your own.”

~Donnie Murphy 1983– (Cubs 2013)
The journeyman infielder had been bouncing around the big leagues off and on for nine years before he arrived in Chicago, when suddenly out of nowhere, he found his power stroke. In just 149 at bats, Murphy hit 11 homers. During the following spring training, the Cubs released him. He had one more cup of coffee in 2014 with the Rangers.