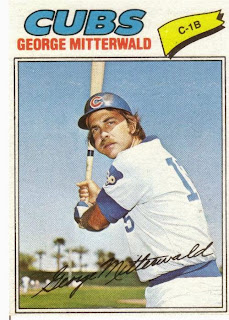 ~George Mitterwald 1945– (Cubs 1974-1977)
While the Cubs were surging toward their 1945 National League pennant, future Cubs catcher George Mitterwald was born in California. Acquired in a trade for Randy Hundley in 1974, George hit 26 home runs for the Cubs. Granted, that was in four full seasons, but still. Mitterwald still holds the Cubs record for most total bases in a single game. He got 14 on April 17, 1974. (Photo: Topps 1977 Baseball Card)

~Justin Berg 1984– (Cubs 2009-2011)
Berg was a reliever who pitched for the Cubs for parts of three seasons. His most extended time with the club was in 2010. That season he appeared in 41 games, but he struggled with his control, and his ERA was north of five. Berg got one more brief taste the following year, but hasn’t been back up in the big leagues since.

~Heathcliff Slocumb 1966– (Cubs 1991-1993)
Slocumb was an important part of the Cubs bullpen during his rookie season of 1991, appearing in more than fifty games. He tailed off a bit, however, the following season, so in early 1993, they traded him to the Indians for Jose Hernandez. Slocumb really blossomed a few years later. In 1995 the Phillies made him their closer, and he responded with an All-Star season. Over the next four years Slocumb closed for the Phillies, Red Sox, and Mariners. His trade to the Mariners is often cited as one of the reasons the Red Sox won the World Series. In return for Slocumb, the Red Sox got Derek Lowe and Jason Varitek.

~Frank Reberger 1944– (Cubs 1968)
The tall right-hander (6’5″) was nicknamed “Crane” by his teammates. He only appeared in three games for the Cubs as a rookie. The Padres selected him in the expansion draft the following spring, and he later pitched for San Diego and the Giants. After his playing career he went into coaching, and managed in the Giants minor league system.

~Luke Farrell 1991– (Cubs 2018)
The son of former big league manager John Farrell got a cup of coffee with the Cubs in the summer of 2018 after he was released by the Cincinnati Reds. Luke started two games and relieved in 18 others, and posted an ERA over five. The Cubs released him in early September and he was picked up by the Angels.