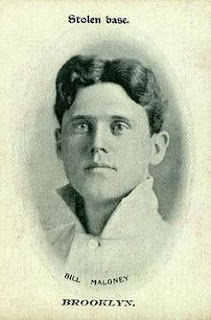 ~Billy Maloney 1878–1960 (Cubs 1905)
Billy only played one season with the Cubs, but the converted catcher had a heck of a year in the outfield for the 1905 Cubs. He led the National League in stolen bases that year with 59. His season was good enough to draw the interest of other clubs. The Cubs coaxed Jimmy Sheckard out of Brooklyn for Maloney, and Sheckard became a key part of their championship-era team. Maloney lost his touch in Brooklyn. He led the league in strikeouts three seasons in a row, and couldn’t get on base enough to make an impact with his speed.

~Jim Andrews 1865–1907 (Colts 1890)
Andrews was a starting outfielder for the Cubs (then known as the Colts) at the beginning of the 1890 season when they played at West Side Park, but hit only .188, and the team cut him loose. After Andrews left the team, the Cubs tore up the league. They were 29 games over .500 the rest of the season and finished in second place.

~Fred Mitchell 1878–1970 (Cubs manager 1917-1920)
Mitchell led the 1918 Cubs to the National League pennant during the only war-shortened season in big league history. He was also the team president that year. However, the following year the Cubs got off to a slow start and Mitchell was relieved of his president title when owner William Wrigley promoted William Veeck Sr. The following year Mitchell was gone as manager too. He later managed the Boston Braves.