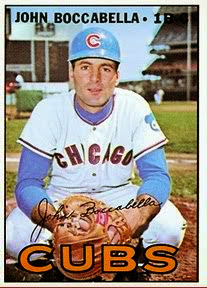 ~John Boccabella 1941– (Cubs 1963-1968)
Boccabella was considered one of the brightest prospects in the Cubs organization. He was so highly touted that Cubs manager Leo Durocher couldn’t wait to play him at first base and send Ernie Banks out to pasture. In the only season Boccabella got over 200 plate appearances with the Cubs, however, he hit only .228. The Cubs left him unprotected in the 1968 expansion draft, and he was chosen by the Expos. His playing time increased in Montreal. In 1973 he became the team’s starting catcher. He was later replaced by a gentleman named Gary Carter. (Photo: Topps 1967 Baseball Card)

~Bruce Kimm 1951– (Cubs player 1979, Cubs manager 2002)
Kimm was a big league catcher, but other than his first season in the big leagues when he was the personal catcher for Mark Fidrych in Detroit, and his last one in 1980 with the White Sox, he didn’t get a lot of playing time. His Cubs playing career lasted exactly nine games. He went 1 for 11. Kimm is probably better remembered for his stint as manager of the Cubs. He took over the job from Don Baylor after Baylor was fired. When the season was over, Kimm was replaced by Dusty Baker.

~Pedro Valdes 1973– (Cubs 1996, 1998)
Pedro got two brief shots with the Cubs at the big league level after turning in some pretty strong numbers in the minors. The slugger hit over 300 homers in the minors, Mexican league, and Japanese league (combined), but in his two stints with the Cubs, the first baseman didn’t hit a single one. He finally got his first (and only) big league homer for the Rangers in 2000. He last played for the silver medal-winning Puerto Rican team in the 2013 World Games.

~Bob Shaw 1933–2010 (Cubs 1967)
Shaw was an important part of the Go-Go White Sox of 1959, winning 18 games and shutting out the Dodgers in the World Series, but by the time he came to the Cubs he was at the tail end of his career. Shaw won over 100 games in his big league career, but none of those came for the Cubs. He was released on September 11, 1967. After his playing career, he became a big league pitching coach.

~Bobby Morgan 1926– (Cubs 1957-1958)
Morgan was a big league infielder, who played for several teams as a backup (Dodgers, Phillies, Cardinals) before joining the Cubs in 1957. The Cubs gave him the starting second baseman job that year, and he responded by batting a whopping .207. After his playing career he became a minor league manager and scout.