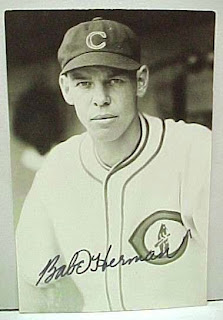 ~Babe Herman 1903–1987 (Cubs 1933-1934)
That’s right, “Babe” played for the Cubs. Unfortunately, it wasn’t THE Babe. His real name was Floyd Caves Herman, and his manager in the minors called him “Babe” after he got a hit in his first at-bat. Babe Ruth was playing then, and the manager said, “You’re my babe.” The name stuck. He was always a good hitter (he finished his career with a .324 average), but his fielding was notoriously bad. He led the league in errors two years in a row, playing outfield and first base. One of his former Brooklyn teammates liked to joke that the only reason Babe wore a glove was because it was the custom. As bad as he was in the field, his baserunning was even worse. His most legendary baserunning error was one for the ages. He accomplished something that was almost impossible…he doubled into a double play. Babe was tagged out at third base when he was the third one to arrive at the base.

~Dave Rosello 1950– (Cubs 1972-1977)
The Cubs really thought Dave Rosello was their shortstop of the future when they traded away fan favorite Don Kessinger to open the position for him. Unfortunately, Rosello didn’t quite live up to expectations. His fielding left a lot to be desired (he made 12 errors in only 80 plus games), and he hit only .242 with no power at all. The Cubs had seen enough. The next season, they acquired Iván de Jesus to take his place.

~Jason Kendall 1974– (Cubs 2007)
The Cubs knew they weren’t getting the same caliber of player that had been named to three All-Star teams and was second all-time in stolen bases by a catcher. Kendall had really lost all the pop in his bat when the Cubs acquired him for the 2007 playoff push. He did start at catcher for the team the rest of the year, and in the playoffs, but the Cubs looked elsewhere for a catcher the following season.

~Rodney Myers 1969– (Cubs 1996-1999)
Rodney pitched out of the Cubs bullpen for parts of four seasons after being selected as a Rule V draft choice. His best season was probably his first one. In 45 games he registered a 4.68 ERA. He later pitched for the Padres and Dodgers before finishing his career in Japan.

~Mike Griffin 1957– (Cubs 1981)
Griffin was a spot starter for the truly awful 1981 Cubs. He started nine games for them during that strike-shortened season and went 2-5, with a 4.50 ERA. He also pitched for the Yankees, Padres, Orioles, and Reds. After his playing career he went into coaching and is currently a minor league pitching coach.

~Manny Seoane 1955– (Cubs 1978)
Manny was mostly a career minor leaguer, but he did get a cup of coffee with the Cubs in 1978. He was a September call-up and pitched in seven games, mainly out of the bullpen. He was acquired from the Phillies for Cubs fan favorite Jose Cardenal, in a trade that appears to have been a salary dump. Manny’s story doesn’t end well. After his cup of coffee with the Cubs, he never pitched in the big leagues again, and was out of baseball entirely by 1982. That year he and fellow former big leaguer Mark Lemongello were arrested for the kidnapping and robbery of Lemongello’s cousins. He was sentenced to seven years probation.

~Elmer Singleton 1918–1996 (Cubs 1957-1959)
Singleton was a pitcher who was nicknamed Smoky. He came to the Cubs from Cincinnati in the trade that also brought Don Hoak to Chicago. His best season with the Cubs was his last year in the big leagues, 1959. Smoky pitched in 21 games for the Cubs, and registered a 2.72 ERA. He previously pitched for the Braves, Pirates, and Senators.

~George Milstead 1903–1977 (Cubs 1924-1926)
The Texas-born lefty was nicknamed “Cowboy” by his teammates. Cowboy pitched mainly out of the bullpen in his three seasons in Chicago — his only years in the big leagues. He won three games and registered a 4.16 ERA in 106 lifetime innings. Cowboy may have had a short big league career, but he pitched in the minor leagues for 25 years. Milstead was 47 years old when he finally retired after pitching in four different decades (20s, 30s, 40s, 50s).

~Elmer Ponder 1893–1974 (Cubs 1921)
Ponder was a pitcher for the 1921 Cubs. The right-hander didn’t miss many bats. He gave up 117 hits and seven homers in only 89 innings. He was part of the package of players the Cubs gave up to get Jigger Statz. Ponder never pitched in the big leagues again. His wife Zelpha was a silent film organist.

~Topsy Hartsel 1874–1944 (Orphans 1901)
Topsy set a record while playing for the Cubs (then known as the Orphans). On September 10, 1901, he set the record for putouts by a left fielder in a nine-inning game: 11 against Brooklyn. The next season he went to the Philadelphia A’s and led the American League in stolen bases and runs scored. He became a star in Philly, one of the most feared baserunners in the league. He was a two-time World Series champ, including one year against his former teammates the Cubs (1910). 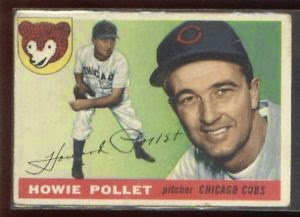 ~Howie Pollet 1921–1974 (Cubs 1953-1955)
The Cubs acquired Pollet in the trade that also brought Ralph Kiner and Joe Garagiola to Chicago. Pollet was a former 20-game winner (twice), All-Star (three times), and World Series champ (two times) but was toward the end of his career by the time the Cubs got him. He won 17 games in his three full seasons with the Cubs. His best years were with the Cardinals. He was later also a pitching coach with the Cardinals and won his third ring in 1964. (Photo: 1955 Topps Baseball Card)