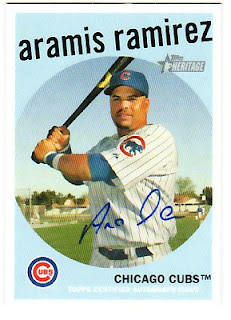 ~Aramis Ramirez 1978– (Cubs 2003-2011)
The Cubs acquired Ramirez during the playoff push of 2003, and he paid off in a big way that season. He hit 4 homers and knocked in ten runs during the playoffs. He also became the best third baseman the Cubs have had since Ron Santo. He was a two-time All-Star, won a Silver Slugger award, and hit more than 25 homers in seven of his seasons in Chicago. Unfortunately, he disappeared when the Cubs needed him most in the 2007 and 2008 playoffs. He was only 2 for 23 in those two series. He signed as a free agent with Milwaukee before the 2012 season. As of Opening Day 2019, Ramirez is number 6 on the Cubs all-time home run list with 239. (Photo: Topps 2008 Baseball Card)

~Paul Maholm 1982– (Cubs 2012)
Maholm had a good half-season with the Cubs as a member of their starting rotation, but he was traded (along with Reed Johnson) to Atlanta for prospects, including fire-balling Arodys Vizcaino. Maholm won 9 games in his four-month-long Cubs career. One of his claims to fame was pitching to comedian Billy Crystal during spring training 2008 (while with the Pirates). He struck him out. Maholm had a ten-year big league career.

~Michael Tucker 1971– (Cubs 2001)
The Cubs acquired Tucker for the playoff push in 2001 along with Fred McGriff. Tucker was a valuable member of the team the rest of the way, but the Cubs fell a little short that season. They finished the year 14 games over .500, but in third place and out of the playoffs. Tucker left as a free agent after the season. In all he played 12 years in the big leagues with the Braves, Reds, Royals, Giants, Phillies, and Mets. One of his claims to fame was hitting the first ever homer in Turner Field in Atlanta (off Cubs pitcher Kevin Foster).

~Brad Woodall 1969– (Cubs 1999)
Woodall logged ten long years in the minor leagues, but he did get a few cups of coffee in the big leagues. His only full season in the majors was with the Brewers in 1998. His final appearance came in a Cubs uniform the following year. He started three games and registered a 5.63 ERA.

~Jose Ortiz 1947–2011 (Cubs 1971)
The Puerto Rican outfielder played with the Cubs in 1971. He and fellow speedster Brock Davis shared the center field position with limited success. The Cubs went out and got Rick Monday after the season, and Ortiz’ time in the big leagues was over. He previously also played for the White Sox.

~Bill Phyle 1875–1953 (Orphans 1898-1899)
Phyle pitched a shutout in his major league debut for the Cubs (then known as the Orphans), but didn’t quite live up to that the rest of his career. He only pitched in limited games for Chicago. His best season was in 1901 with the Giants when he won 7 games, and pitched 16 complete games. After his playing career, he became a minor league umpire.