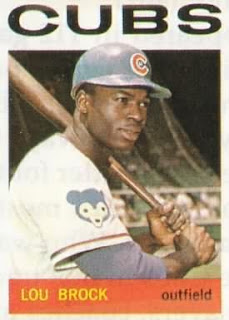 ~Lou Brock 1939–2020 (Cubs 1961-1964)
It’s not that the Cubs didn’t realize they had a good potential player on their hands. It’s just that they didn’t know how to develop him. Brock came up through the Cubs system during their ill-fated College of Coaches era. Every few weeks Lou was getting different directions. When they traded him in 1964 for a former 20-game winner, there wasn’t much of an uproar in Chicago, but the Cubs players knew their team was making a big mistake. Lou Brock was a six-time All-Star for the Cardinals, led the league in runs scored (twice), doubles, triples, and stolen bases (eight times). He hit over .300 eight times. He retired as the all-time career leader in stolen bases. And most importantly, he retired as a two-time World Series champion. In his first year of eligibility, Lou Brock was elected into baseball’s Hall of Fame. He has more career hits than any other player born in Arkansas. (Photo: Topps 1964 Baseball Card)

~Chris Coghlan 1985– (Cubs 2014-2016)
Coghlan was the Rookie of the Year for the Marlins in 2009 when he hit .321, but he suffered through a series of injuries over the next few years. In 2014 with the Cubs, he finally got another chance to start, and he responded with a great season. He had a .352 OBP, hit 9 homers, stole 7 bags, and clubbed 43 extra base hits. In some ways, his 2015 season was even better. For a time, he was serving as the #3 hitter in the lineup and starting every day at second base. Despite setting career records for homers (16) and stolen bases (11), he slumped badly at the end of the year and lost his starting job. During the 2015 playoffs, he served mainly as a pinch hitter. The Cubs traded Chris to the A’s after the season, but reacquired him in 2016, and he once again served an important role. Coghlan appeared in four of the seven World Series games. He was granted free agency after the series.

~Felix Heredia 1985– (Cubs 1998-2001)
Felix was picked up for the playoff drive of 1998. He had been a part of the ’97 champion Marlins team and was an important part of their bullpen, but he didn’t pitch well for the Cubs. He had a very high ERA for a reliever, but the lefty got plenty of opportunities over the next few years. The Cubs finally gave up on him in 2001. His nickname was “El Gato Flaco,” which is Spanish for “Skinny Cat.”

~T-Bone Phillips 1933– (Cubs 1958-1959)
He went by Taylor, but to his Cubs teammates, he was always known as T-bone. Phillips was a lefty starter for the ’58 Cubs and while he won only 7 games that year, it was probably the best season of his career. Hard-throwing and wild (he was among the league leaders in wild pitches), Phillips ranks as the fourth worst-hitting pitcher (minimum 100 at-bats) in big league history, going 6-113 (.053). He was one of three Taylors on the ’58 Cubs (Tony and Sammy). The Cubs traded him after a rocky start in 1959 for Seth Morehead. T-bone pitched a few more seasons for the Phillies and White Sox before retiring.

~Steve Cishek 1986– (Cubs 2018-2019)
The veteran reliever with the rubber arm came to the Cubs after stints with Miami, Seattle, St. Louis, and Tampa. He led the team in relief appearances in 2018 with 80, but that might have been a bit too many appearances. After being unhittable for most of the year, he began to be knocked around a bit in the season’s closing days. Nevertheless he ended the year with a sterling 2.18 ERA, with four wins and four saves. He had a very similar year in 2019–lots of appearances (70), a very good ERA (2.95) and the occasional save (7). He also ran out of gas in the closing weeks of the season.