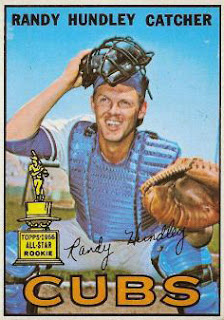 ~Randy Hundley 1942– (Cubs 1966-1973, 1976-1977)
Randy was a good ol’ boy from Martinsville, Virginia who talked with a Southern accent, and also had a fierce competitiveness. So naturally, his teammates called him Rebel. During his stellar Cubs career he was an All-Star and Gold Glove winner (in an era that Johnny Bench also played in the NL), and in 1968 set a record that will probably never be broken. He caught 160 games for the Cubs that year — an astonishing achievement. Unfortunately, he was never really the same after that year. The Cubs traded him to the Twins in 1974 (for George Mitterwald), and he played one season for both the Twins and the Padres before ending his career back in Chicago right where it began. (His son Todd also later caught for the Cubs.) After his playing career was over Randy created the first Cubs fantasy camp, a program that still runs to this day. (Photo: Topps 1967 Baseball Card)

~Carlos Zambrano 1981-– (Cubs 2001-2011)
For all the controversy he stirred in his Cubs career, Carlos was a very good starting pitcher for a decade. He was a three-time All-Star, twice finished in the top five in Cy Young voting, won 13 or more games six seasons in a row, won three Silver Slugger awards (as the league’s best hitting pitcher), and threw a no-hitter in 2008. He also started games for the Cubs in four different playoff series. Unfortunately for the Cubs, he didn’t win any of his five playoff starts. Carlos will always be remembered in Chicago not for his pitching or hitting ability, but for his temper. He punched his teammate Michael Barrett in the face, got into a shouting match in the dugout with his teammate Derrek Lee, and stormed out of the locker room after a game saying he was quitting baseball. That last one led to a suspension. He later changed his mind and apologized, but it was too late. His Cubs career was over. Zambrano is #2 on the Cubs all-time strikeouts list behind only Fergie Jenkins (1542).

~Jim McKnight 1936–1994 (Cubs 1960, 1962)
The Cubs got McKnight from the Cardinals in exchange for their slugging outfielder Moose Moryn. Moryn admittedly didn’t have much left in the tank, but McKnight was not ready for prime time. The third baseman/outfielder spent the full 1962 season on the Cubs roster and was used mainly as a pinch hitter. He hit .224 and managed exactly one extra base hit (a triple). The Cubs traded him to the Giants after the season. McKnight was prototypical 4A player — pretty good in the minors (nine seasons with double-digit homers), but not quite good enough for the big leagues.

~Joel Newkirk 1896–1966 (Cubs 1919-1920)
Sailor, as he was known by his teammates, was a right-handed pitcher who got an ever-so-brief sniff of the big leagues at the end of 1919 and beginning of 1920. He had three lifetime appearances and got lit up pretty heartily by the league. In 8.2 innings pitched, he allowed nineteen baserunners. After he gave up a homer to Cardinals pitcher Bill Sherdel, the Cubs sent Sailor back out to sea.

~Harry McChesney 1880–1960 (Cubs 1904)
Harry had one of the great baseball nicknames. His teammates called him Pud. Pud had a very brief big league career. He backed up Kangaroo Davy Jones in the outfield, and got into 22 games for the Cubs. The rest of his baseball career (he played until 1915) was spent in the minor leagues. Pud was also one of the best football punters of his era.

~Bill Eagan 1869–1906 (Colts 1893)
He was known as “Bad Bill” and it appears there was good reason for that. Bad Bill wasn’t so much known for his hitting or fielding (he hit .263 for the 1893 Cubs — then known as the Colts). He was known for his bad behavior and drinking. A few years after he left the Cubs (when he was playing with Pittsburgh), he threatened to murder his wife and blow his own brains out. The police got to him before he could do it and sent him off to an asylum. Bad Bill died at the age of 35.

~George Decker 1866–1909 (Colts 1892-1897)
Decker was nicknamed Gentleman George. He was the steady understudy to Cap Anson at first base (and eventually succeeded him there), but he was also a jack-of-all-trades utility man, helping out the team wherever and whenever they needed him. One time they really needed him was the day West Side Grounds burned down in 1894. Decker and his teammates Walt Wilmot and Jimmy Ryan saved a bunch of lives that day by breaking down the fence with their baseball bats. The fence had been built to keep unruly fans off the field. Unfortunately, his story doesn’t end well. Decker reportedly went insane in 1900. By 1909, Gentleman George was dead at the age of 43.