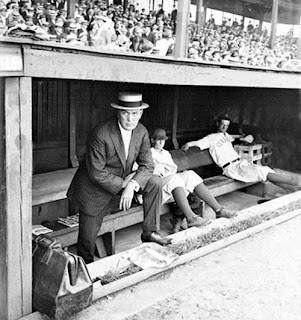 ~Hank O’Day 1859–1935 (Cubs manager 1914)
He was the umpire who made the most controversial call in baseball history…the play that became known as “The Merkle Boner.” The NY Giants never forgave him for favoring the Cubs on that play, and were especially suspicious of him because he was born and raised in Chicago (although he played for the Giants in his playing days). In 1914, that call looked even more suspicious when Hank O’Day was hired by the Cubs to manage their team. Not only did they hire O’Day, they hired him to replace beloved Cub Johnny Evers, who owner Charles Murphy had run out of town. Evers spent the 1914 season managing (and playing for) the Boston Braves. The Braves went to the World Series. The Cubs finished in fourth place, 16 ½ games behind the Braves. O’Day’s managing career with the Cubs lasted exactly one season. He went back to his original job…National League umpire. He remained in that job until 1927. He was recently (2013) elected into baseball’s Hall of Fame (as an umpire).

~Rowdy Elliot 1890–1934 (Cubs 1916-1918)
His real name was Harold Elliot, but his teammates called him Rowdy. The reason for his nickname has been lost to time, but when you hear Rowdy Elliot’s story, you can probably make an educated guess. He was a catcher for the Cubs from 1916 to 1918. His first year with the Cubs was the first year they played in what is now known as Wrigley Field. Rowdy was one of eight catchers to play for the Cubs that year. The 1916 group includes Nick Allen (four games), Jimmy Archer (61 games), Clem Clemens (nine), Rowdy Elliot (18), Bill Fischer (56), Bucky O’Connor (one), Bob O’Farrell (one), and Art Wilson (34). His Cubs career ended in May of 1918, when he suddenly left the team and enlisted in the Navy to fight in World War I. Rowdy played one more big league season after the war (with Brooklyn), and he bounced around in the minors after that until 1929. Five years later Rowdy was dead. He fell from an apartment window and died from the injuries. Though the rumor was never confirmed, it’s been reported that Rowdy was drunk at the time of his death. A collection was taken up by friends to keep Rowdy Elliott, who was penniless, from being buried in a potter’s field.

~Bobby Ayala 1969– (Cubs 1999)
Ayala was a big league reliever for eight years and had a couple of very good seasons with Seattle. He was their closer and saved 56 games for them. When the Cubs got him in 1999 he was toast. His last appearance in a big league uniform came with the Cubs on October 2, 1999.

~Ken Patterson 1964– (Cubs 1992)
Patterson was a left-handed reliever acquired in the trade that brought Sammy Sosa to the Cubs (for George Bell). Unfortunately for Ken, his Cubs career wasn’t quite as decorated as his fellow ex-White Sox teammate. He went 2-3, with a 3.89 ERA in 32 appearances. After the season he was granted free agency and finished his career with the Angels.

~Al Spangler 1933– (Cubs 1967-1971)
Spanky, as he was known by his teammates, had some clutch hits for the Cubs over his five seasons as a backup outfielder and pinch hitter, but Spangler never had the kind of power necessary to start in the big leagues. He got his most extended playing time during Chicago’s ill-fated 1969 season. In over 200 plate appearances he hit four homers and knocked in 27 runs. He also, unfortunately, only hit .211. That was the beginning of the end of his 13-year big league career. He later went into coaching.

~Charlie Gilbert 1919–1983 (Cubs 1941-1946)
It wasn’t Charlie’s fault that he was part of the trade that sent fan favorite Billy Herman to the Dodgers in 1941. But Cub fans never let him forget it. While Herman was leading the Dodgers to the World Series, Charlie was hitting a whopping .184. Charlie’s time with the Cubs was interrupted by his military service in World War II. He missed their entire pennant-winning season of 1945.

~Jaime Garcia 1986– (Cubs 2018)
The Cubs probably figured that Garcia was worth a flyer when he was released by the Blue Jays in August of 2018. They signed the 4-time 10-game-plus winner for the remainder of the season. Garcia appeared in eight games and posted a 4.70 ERA. 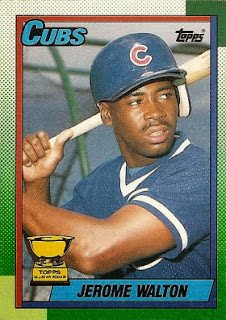 ~Jerome Walton 1965– (Cubs 1989-1992)
Jerome burst onto the scene as a rookie in 1989 and immediately made his mark. The Cubs leadoff man stole 24 bases, hit .291, had a 30-game hitting streak, and was named the Rookie of the Year. He also led his team to the playoffs and hit .364 in the 1989 NLCS. Unfortunately, Jerome could never follow up that incredible opening act. The next year his average dipped, and then he started having injury problems. By 1992, the Cubs let Walton leave as a free agent. He played sparingly for the Angels, Reds, Braves, Orioles, and Rays before calling it a career.(Photo: 1990 Topps Baseball Card)