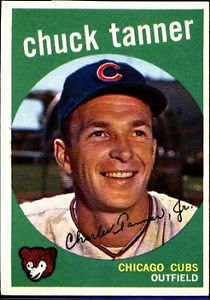 ~Chuck Tanner 1928–2011 (Cubs 1957-1959)
Chuck Tanner played in the big leagues for parts of eight different seasons. His career started with a bang — a home run in his very first big league at-bat for the Milwaukee Braves in 1955. They released him near the beginning of the 1957 season, and the Cubs grabbed him immediately. Tanner didn’t have a lot of power or speed, but he was steady, and the Cubs weren’t exactly scaring the National League with their outfield of Lee Walls, Bob Speake, and Moose Moryn. Tanner got more at-bats with the 1957 Cubs than he did for the rest of his career combined. He hit .286 that year and belted seven homers, but even on a team as pathetic as that 1957 Cubs team, that didn’t cut it. By 1958, he was back on the bench, and by 1959, he was shipped off to Boston. Tanner later got a cup of coffee with the Indians and the Angels, but the enthusiastic and sharp-minded outfielder found his calling elsewhere. He went on to manage the 1979 Pittsburgh Pirates to the World Series title. (Photo: Topps 1959 Baseball Card)

~Johnny Abrego 1962– (Cubs 1985)
Johnny only had one shot at the big leagues in his baseball career, and that came with the injury-depleted 1985 Cubs. The entire starting rotation from the 1984 division winners got hurt the following year, and Johnny was among the pitchers brought up to fill in. He had five starts in September and didn’t impress the brass. He never got another chance. He hurt his arm in the minors and was out of baseball at the age of 24.

~Dan Larson 1954– (Cubs 1982)
Larson was one of the Phillies brought over by Dallas Green after becoming general manager of the Cubs. He came over in the Keith Moreland/Dickie Noles for Mike Krukow trade. Unlike his fellow ex-Phillies, Larson didn’t have much success with the Cubs. He began the 1982 season with the team, went 0-4 with a 5.62 ERA, and was shipped out by July 1st. Chicago was the last stop of his big league career. (He had also pitched for Houston before joining the Phillies)

~Wayne Nordhagen 1948– (Cubs 1983)
Wayne had his biggest success on the south side of Chicago as a member of the White Sox. He hit over .300 for the South Side Hitmen and slugged 15 homers one year. By the time he came to the north side, he had made stops in Toronto and Pittsburgh and didn’t have much left in the tank. His final big league at-bats came for the Cubs in 1983. He hit .143 in 35 at-bats before the Cubs released him. Nordhagen’s nephew is former Red Sox first baseman Kevin Millar.

~Bill Tremel 1929–2013 (Cubs 1954-1956)
One of the all-time great nicknames — his teammates called him Mumbles. Mumbles was a reliever for the Cubs in the mid-50s and did manage six saves over three seasons. He had some control issues, however, and the Cubs sent him down to the minors in 1956. He never made it back to the big leagues. Mumbles hung his spikes for good in 1959.

~Bill Sullivan 1853–1884 (White Stockings 1878)
Sullivan was an Irish immigrant who played in only a two games for the Cubs (then known as the White Stockings) on August 9 and August 10 in 1878. He got one hit. Not much is known about him. There is no record of whether he batted right-handed or left-handed, only that he played left field. He died at the age of 31.