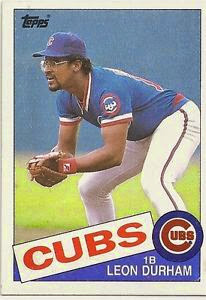 ~Leon Durham 1957– (Cubs 1981-1988)
Of course, his real name was Leon, but it was hard to be named Durham without getting the nickname Bull. No Cubs fan will ever forget him. Durham had a pretty good career with the Cubs, making the All-Star team twice, hitting more than 20 homers five times, and stealing more than twenty bases twice, but he will also be remembered for Game 5 of the 1984 NLCS. The Cubs were eight outs away from going to the World Series, leading the game 3-2. A ground ball by Tim Flannery went through Leon’s legs and opened the floodgates. The Padres scored three more times, including two runs on a fluke double that should have been a double-play, but took a weird hop over Ryne Sandberg’s head instead. A whole new generation of Cubs fans built up scar tissue that remains inside their bodies today. (Photo: Topps 1985 Baseball Card)

~Mike Bielecki 1959– (Cubs 1988-1991)
There was no way the Cubs could have anticipated Bielecki was going to be an 18-game winner in 1989. He had won 12 total games in his previous five big league seasons. Something just clicked that division-winning year. Bielecki not only won 18 games, he pitched four complete games, three shutouts, and posted a sparkling 3.14 ERA. He started the only game the Cubs won in the NLCS that year. He came back down to earth the following season, but in 1991 he did it again, winning 13 games. The Cubs traded him to the Braves at the end of the season, giving Bielecki his only shot at the World Series. He pitched two perfect innings in the 1996 World Series.

~Earl Stephenson 1947– (Cubs 1971)
Earl made his big league debut with the Cubs in April of 1971 and made sixteen appearances before returning to the minors. He won a game and saved a game during his brief stint with the Cubs. He also had a cup of coffee with the Brewers and the Orioles, but spent most of his 11-year baseball career in the minor leagues.

~John Vukovich 1947–2007 (Cubs manager 1986)
Vukovich had a ten-year career in the big leagues as a backup infielder (mostly for the Phillies), but he also became a Cubs coach after his playing career ended. For two days he was even the manager of the team. After Dallas Green fired Jim Frey and before Gene Michael took over, Vukovich was the interim manager for two days. The Cubs won one and lost one.

~Art Nehf 1892–1960 (Cubs 1927-1929)
Nehf was a two-time 20-game winner and two-time World Series champ with the Giants before he came to the Cubs at the tail end of his career. He no longer had the stuff he had earlier in his career (he only struck out 79 batters in over 300 innings), but he did have a very good season in 1928, going 13-7 with a 2.65 ERA. He hung on for the 1929 season, and pitched (badly) in the World Series for the Cubs. Art was the pitcher who gave up the inside-the-park homer that Hack Wilson lost in the sun. That was his last hurrah in the big leagues.

~Larry Doyle 1886–1994 (Cubs 1916-1917)
The Cubs acquired “Laughing Larry” at the end of their first season at Wrigley. Doyle was widely respected and admired in the league. The second baseman had been the captain of the Giants, and had both speed and power for the era. The Cubs got him for Heinie Zimmerman and inserted him right into their starting lineup. Doyle was excited to be playing alongside his old Giants teammate Fred Merkle (the Cubs first baseman.) Even though Doyle had just won the batting title for New York, he didn’t hit well in Chicago, batting only .254. The Cubs traded him back to the Giants before the 1918 season for Lefty Tyler. Tyler was a key starter for the Cubs in that pennant-winning season. Doyle retired soon after returning to New York. He ended his career with a .290 lifetime average in 14 big league seasons.

~Rene Rivera 1983– (Cubs 2017)
The Cubs picked up the veteran backstop in August when they needed some veteran help. He filled in admirably for the injured Willson Contreras. The 34-year-old also had some big hits, including a grand slam to win a game. After the season he was granted his free agency. He has also played for Seattle, Tampa, Minnesota, San Diego, New York, Los Angeles, and Atlanta.