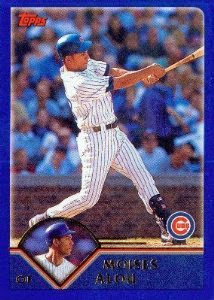 ~Moises Alou 1966– (Cubs 2002-2004)
Moises had a borderline Hall of Fame career. He was a seven-time All-Star, a two-time Silver Slugger award winner, a World Series champion, hit over .300 for his entire 17-year career, and slugged more than 300 lifetime homers. Those numbers are very nearly HOF caliber. Unfortunately for Moises he also played in the steroids era, and he’s not really remembered for his hitting at all. Cubs fans remember Moises for two things more than anything else. First of all, he admitted that he urinated on his hands before every game to toughen his hands. That’s a difficult visual to shake. But more importantly, he was in the middle of that infamous Bartman moment for the team that came only five outs away from winning the 2003 NL pennant. Moises was the one who was trying to catch the ball Bartman got his hands on, and Moises was the one who created a scene on the field, which riled up the fans and his teammates. If he had simply gone back to his position, likely nothing bad would have occurred. When ESPN produced a special on the tenth anniversary of the infamous event (in 2013), Moises also admitted that he and Aramis Ramirez decided after Game 6 to book their flights back to the Dominican because they just knew they wouldn’t win Game 7. I’d like my money back for those Game 7 tickets please. (Photo: Topps 2003 Baseball Card)

~Casey Coleman 1987– (2010-2012)
The son of former big league pitcher Joe Coleman (who also pitched briefly for the Cubs in 1976) and grandson of former big league pitcher Joe Coleman (an All-Star with the Athletics in the 40s), Casey was a starting pitcher for the Cubs for several seasons. He mostly bounced between Iowa and the Cubs, serving as a sixth starter when needed or filling in for injured members of the starting rotation. He won 7 games over three seasons.

~Zach Putnam 1987– (Cubs 2013)
Putnam pitched for four teams in the big leagues, including the Cubs in 2013. His stint with the Cubs is probably not on his highlight reel. In five games he registered an ERA of 18.90. He had a much better run on the south side of Chicago after leaving the Cubs.

~John Koronka 1980– (Cubs 2005)
Koronka came up from Iowa in 2005 and filled in for injured Cubs starters. It didn’t go well. He had a 7.47 ERA. He later pitched for the Rangers and the Marlins, and also spent a year in Japan. After his playing career, the Cubs hired him as a scout.

~Matt Keough 1955– (Cubs 1986)
Matt’s father Marty played for the Cubs when Matt was 11 years old. Matt got off to a good start in his own big league career. He was an All-Star in his second year, but soon developed arm problems. After that, Keough managed to hang on in the big leagues for another six years despite having very little success. One of those years (1986) was with the Cubs. He was 2-2 with a 4.97 ERA when the Cubs released him in June.

~Cliff Curtis 1881–1943 (Cubs 1911)
Cliff was a very mediocre pitcher about a hundred years ago. One year with the Boston Braves he had an incredible record of 6 wins and 24 losses. During that season he set a record with 23 consecutive losses. That record was later broken by future Cub Anthony Young. Curtis still has the record for most consecutive starts without a win (28), although that was tied by future Cub Matt Keough. With the Cubs Cliff was 1-2, with a 3.86 ERA.

~Tommy Hunter 1986– (Cubs 2015)
The right-handed reliever and former closer was acquired from the Orioles at the trading deadline (for Junior Lake) to bolster the Cubs bullpen down the stretch. Unfortunately, Hunter never really found his rhythm. He gave up four long balls in only 15.2 innings and posted an ERA over five. After the season he was permitted to leave via free agency.